Pluck for Tomorrow and the Successor, Part 2 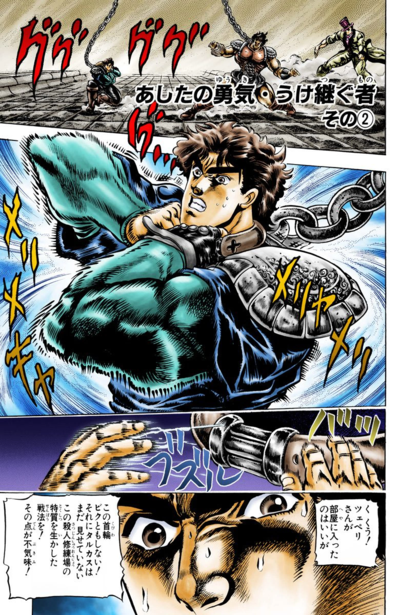 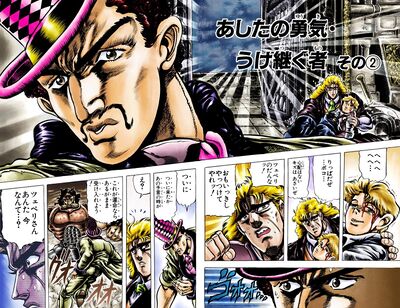 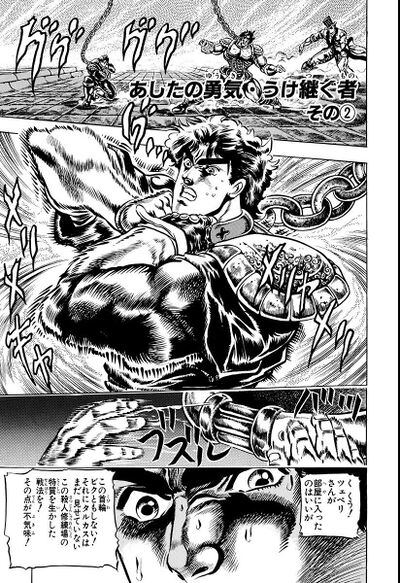 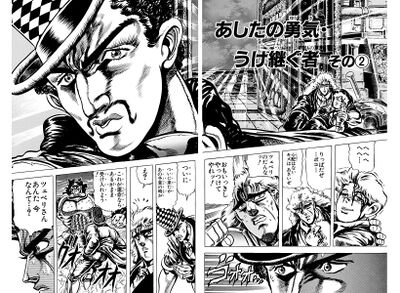 Jonathan notices that Zeppeli has gotten into the arena, which reassures him, but he still knows that Tarkus has not shown the way he fights in the arena yet. In addition, Speedwagon has entered the arena, and he thanks Poco for opening the door. Zeppeli then realizes that his prophecy is coming true. Zeppeli then flashes back to when he trained with Tonpetty.

In Tibet, Tonpetty congratulates Zeppeli on his progress, but warns him once again of the terrible fate that would befall him should he continue his training. Zeppeli, curious, then asks Tonpetty about his death. His master replies with this bizarre description:

“In a secret room filled with the smell of death…when a young kid opens the gate to release a young lion into the future you will start the fire to the wounds and will soon die a painful death.”

Back in the present, Zeppeli realizes that the dangerous scenario he is in resembles Tonpetty’s cryptic sentence perfectly. Zeppeli realizes what he must do to assist Jonathan and accepts the fate prepared for him in order to do it.

Zeppeli jumps at Tarkus and spins himself around using the Tornado Overdrive. However, Tarkus jumps out of the way and manages to wrap his chain around Zeppeli's torso and suspend him in midair. Tarkus, having both Jonathan and Zeppeli right where he wants them, pulls hard on the chain. To Speedwagon's horror, Tarkus severs Zeppeli's upper body from his lower body and snaps Jonathan’s neck by pulling him up to the ceiling completely.

Thinking that he has won, Tarkus gloats over his victory. However, he soon notices that Jonathan and Zeppeli are still breathing, so he goes to finish them off. He then notices Zeppeli has Jonathan's hand. Just as Tarkus notices this, Zeppeli uses the “Supreme Deep Pass Overdrive” to give the rest of his life energy to Jonathan.