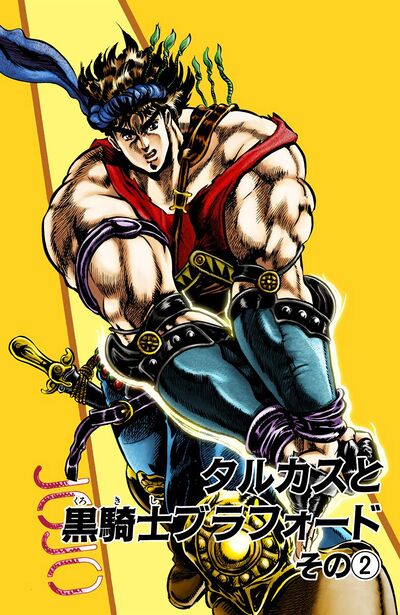 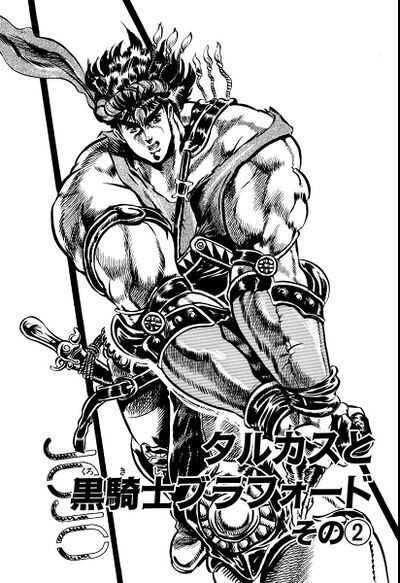 Jonathan tries to send Ripple through Bruford's hair, but it doesn't work because Bruford continues to drain Jonathan's blood with his hair. Tarkus draws a mighty sword, threatening Jonathan with it. Dio then begins to explain the story of Tarkus and Bruford.

In 1565, two queens fought for the throne of England. One was Elizabeth I from the Tudor dynasty and the other was Mary Stuart, queen of Scotland. Tarkus was a knight of great strength, and was famous for his large sword; Bruford was known for having attacked enemies by surprise after swimming through a lake while wearing his armor. Both were raised as knight with no families, and trained their bodies to perfection. Eventually, the two of them pledged their allegiance to Mary. Tragedy then befell Mary when her husband Darnley died of unknown causes. Elizabeth saw a chance to get rid of Mary and blamed her for killing her own husband. The nobles began to revolt against Mary because of the scandal, and she was eventually imprisoned in a tower.

Elizabeth then struck a deal with Tarkus and Bruford: If they surrendered, Elizabeth would spare Mary's life. The two knights agreed to the arrangement; however, just before they were executed, the executioner revealed to them that it was not Mary in the tower, and the real Mary Stuart was dead. In the present day, Dio turned them into demons of vengeance to use for his own sinister goals.

With his arm trapped by Bruford's hair, Jonathan gathers Ripple energy in his left hand and punches his right arm with it. Jonathan's scarlet overdrive disintegrates the hair trapping his arm and he is freed to continue fighting.

Author's Note
“
The showdown between Sendo and the Stone Mask is at its peak! Thanks to the unintentional strain from using a pen, I now have a giant callus on my hand!
”
—Hirohiko Araki
“
仙道と石仮面の対決も最高潮！思わずペンに力が入るおかげで手に巨大なペンダコが!!
”
—Hirohiko Araki