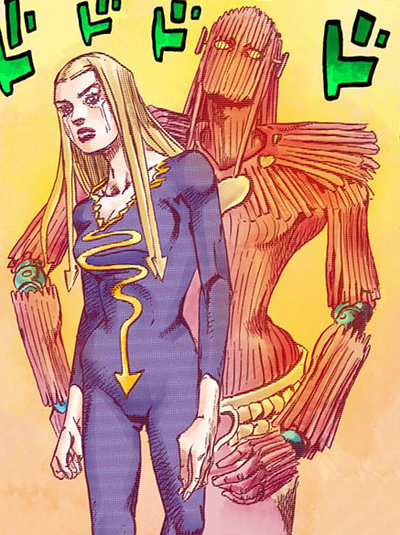 JJL Chapter 54
“
No matter what sort of Stand User she is... strength is based on character.
”
—Tamaki Damo, JJL Chapter 55: Walking Heart, Breaking Heart

Walking Heart takes on a feminine humanoid-appearance resembling Hato, almost entirely comprised of long, thin, rigid strands. It lacks a nose and a mouth, having only emotionless lens-like eyes and long, rigid hair. On its chest is a large heart, surrounded by a smaller heart on each side and a heart-shaped collar around its neck. Around its waist is a belt with several ridges and another heart in the middle.

The series is known for alternating colors between media, the information presented below may or may not be canon.
Eyes(Gold-yellow)
Body
(Salmon red body with gold-yellow accessories, and emerald-green joints)

Not much is shown of Walking Heart. Although it possesses a form, its power has only manifested as an ability that Hato uses for direct combat. Although straightforward, Walking Heart's speed and power makes Hato a surprisingly deadly fighter.

Hato kicks while stretching her heels to attack from a distance

Walking Heart allows Hato to turn her heels or the heels of her shoes into hardened spikes, allowing them to extend as far as 4 meters.[1] The extension and subsequent retraction are fast enough to outspeed human reaction time. These spikes can penetrate any surface, including glass and stone, as well as other human's (or Rock Humans') bodies.[2] This allows Hato to walk up walls with her heels digging directly into the brick or other materials, as well as attack with her extended high heels with kicking motions.[2] It is unknown if Walking Heart can extend other objects or parts of her body in this fashion.