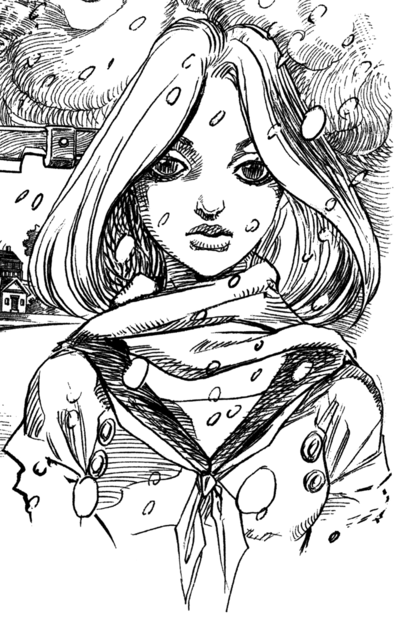 The Book Prologue: Introitus
“
Have you ever wished you could travel to the future? That's how I feel right now. "Time" itself is being created inside here.
”
—Chiho Futaba, The Book Final Chapter: Communio

Chiho Futaba (双葉 千帆, Futaba Chiho) is a character featured in The Book: 4th Another Day, a light novel based on Diamond is Unbreakable.

Chiho is a young Japanese girl with long light hair. Like Takuma, Chiho is very thin and frail-looking.

Chiho is an inquisitive girl with a passion for writing, but is otherwise ordinary.

After discovering a passion for literature and especially writing stories, Chiho dreams of becoming a writer, and is writing her own book. She investigates Morioh's landmarks in order to get material for her stories and looks up to Takuma as a senpai knowledgeable in literature, in contrast to her forgetfulness. Chiho herself reads a lot and the smell of old books makes her feel at ease. Children's books are her favorite type of books.[1]

In contrast, Chiho is uninterested in typical feminine activities like make-up.[1]

Because of her passion, Chiho especially frequents Takuma, the only person she feels can freely talk about writing a novel with.[1]

When she was a child, Chiho was almost mugged, and a mysterious boy saved her.[1] She developed a friendship with Takuma as she believes he could be her savior, and then falls in love with him.[2] Even after she learns that Takuma is her half-brother, she decides to give birth to their child so that Takuma wouldn't have entirely wasted his life.[3]

Chiho has an undeniable talent for writing. When motivated, Chiho is able to write and fill an entire notebook in one night.[1]

Chiho Futaba was a child who saw her parents fighting many times. As she couldn't concentrate on reading over the sound of her mother breaking dishes, she ran away from home when she was 12 years old. She decided to take a bus to S City, but gave up after realizing she lived her entire life in Morioh.

One day, Chiho was attacked by a delinquent when alone, but was saved by a mysterious boy and returned home.

Along the years all her friends stopped talking to her to be with boys, while her best friend moved to an all-girls high school in S City to become an interpreter for Hollywood stars. Chiho decided to write a diary and ended up spending hours writing in it. After seeing it was written more like a novel, Chiho decided to become a writer. She lives with her father Teruhiko Futaba now in Morioh, and is spoiled by him. She lived relatively close by to Yukako Yamagishi.

In 2000, Chiho is an aspiring novelist. Fascinated with rumors from Morioh which could give her ideas for her novels, she researches about the iron tower man and later the bizarre book.

One day, Chiho meets Takuma Hasumi and becomes his friend, believing him to be the boy who saved her from her aggressor years ago even though Takuma denies it. During that time, she frequents Takuma regularly, bonding over their mutual love for literature. Several months later, Chiho falls in love with Takuma, and finally knows it is Takuma who saved her before. On one occasion she has sex with Takuma and ends up getting pregnant.

Two months after they became a couple, Chiho invites Takuma to her home for dinner, and later receives a black amber necklace from Takuma, which is exactly the one her father Teruhiko gave Takuma's mother, Akari Hirai, years ago. From her father's words, Chiho learns that she's actually Takuma's half-sister. Her father also wants to use his stand, Memory of Jet, to hide her away from Takuma. Chiho then stabs Teruhiko to death with a kitchen knife, then sets their house on fire. After Takuma dies, Chiho is later taken in by her mother, who lives in S City. Her mother also keeps her hidden from the police, as Chiho is the prime suspect in the murder of her father.

On her last public appearance on August 2000, Chiho meets Koichi Hirose and talks with him a little while and reveals her pregnancy, intending to give birth to Takuma's child. Chiho then leaves Morioh in a bus.