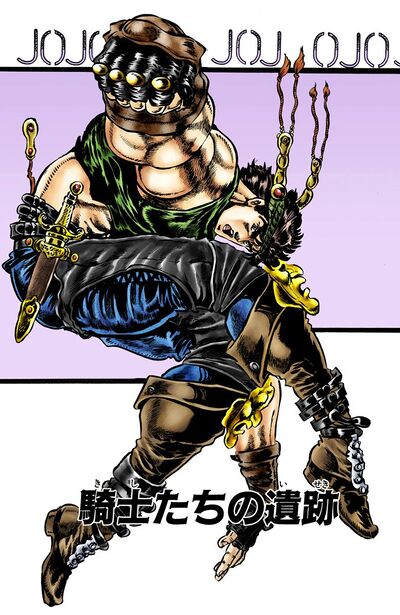 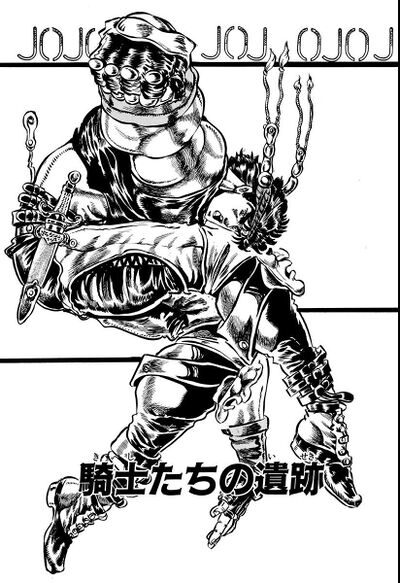 Elsewhere in the graveyard, Poco attempts to tell two thugs about the zombie knights; unfortunately, due to his reputation as a liar, they do not believe his story. The two proceed to threaten to tie up the frightened Poco with a rope by knight's grave. Before they can actually do this; however, one of the thugs steps on something. When he looks down, he sees the distorted faces of melted zombies underfoot. The three of them are approached by Tarkus and the thugs run off in fear, leaving Poco to his doom at the hands of Tarkus.

Jonathan promptly comes to Poco’s aid along with Zeppeli and Speedwagon. An unfazed Tarkus strikes the earth with his massive sword and causes the ground beneath Jonathan and his allies to give way and they all fall into what used to be the training ground of the knights. Though they stand stunned at the sight, Zeppeli collects his senses and wonders where Tarkus has gone. No sooner does Zeppeli ask this question does he spot Tarkus on a tall rock formation with the two thugs that bullied Poco earlier. Tarkus twists and crushes the terrified men above his head using only his brute strength. Jonathan shields Poco's eyes from the sight while Tarkus holds the mangled bodies over his mouth to drink the blood from them. Rejuvenated and threatening to do the same to the rest of them, Tarkus then proceeds to charge his adversaries.

Cornered on a cliff, Jonathan tries to think of an escape plan. He suddenly notices leaves strewn about on the ground. Having also seen them, Zeppeli suggests to Jonathan to use a special Ripple. The two of them proceed to use the Life Magnetism Overdrive to combine the leaves into a single giant leaf. Jonathan, Zeppeli, Speedwagon, and Poco use it as hang-glider to escape Tarkus.