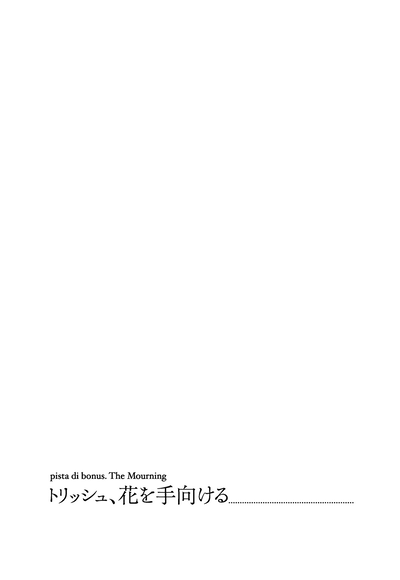 pista di bonus. The Mourning (トリッシュ、花を手向ける, Torisshu, hana o tamukeru, lit. Bonus Track. The Mourning (Italian) / Trish, offering flowers (Japanese)) is a bonus prequel chapter of Purple Haze Feedback, a light novel based on the JoJo's Bizarre Adventure series. It was included in the bunkoban release of the novel.

After the events of Vento Aureo, Trish Una visits the tombstone of Bruno Bucciarati to say a few words to him. Incidentally, Bucciarati's mother also arrives there and asks Trish how Bucciarati died. A flashback reveals how the group discovered Bucciarati's corpse in the Colosseum after defeating Diavolo. Giorno then admitted that he knew that Bucciarati was dead all along and that they still worked together to topple Diavolo. Angered at the betrayal, Mista almost shot Giorno but Giorno persuaded him to let him live as he would have been the fourth member of Team Bucciarati to die, much to Mista's superstition towards the number. In the present, Trish and Bucciarati's mother then discuss their respective memories of Bucciarati and his righteousness. The two ultimately weep over Bucciarati's tombstone.