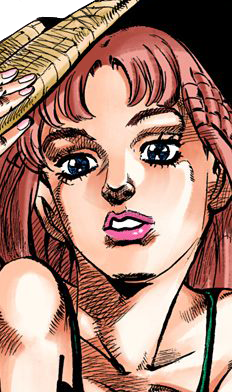 JJL Chapter 110
“
I'm really sorry. I've been feeling awful this morning. I think I've got a pretty bad headache, too... I really am sorry, but I'd like to take my shift today off...
”
—Kiyomi Kujo, JJL Chapter 50: Vitamin C and Killer Queen, Part 1

Kiyomi is irresponsible and neglectful toward her son. Instead of going to work, she would take several days off and relax on the beach. She goes as far as taking Unisom sleeping pills before calling her workplace to feign sleepiness.[2]

She also doesn't bother saving her own son and watches him drown. Although she appears worried initially, Kiyomi thinks it may be better to let Josefumi die so she could be free, as two men previously stopped flirting with her after seeing she has a kid. After Yoshikage Kira saves Josefumi from dying, Kira points out that Kiyomi looked like she was feeling something else rather than relief.[2] Despite her negligence, and after seemingly abandoning him, Kiyomi kept photos of Josefumi on her phone, still looking for her son.

She is brought to TG University Hospital where Josefumi is given emergency treatment by Holy Joestar-Kira and Yoshikage Kira. She remains in the waiting room, fearful over whether or not Josefumi survived, until she is informed by Kira that her son is all right.[2]

Her relationship with Josefumi becomes nonexistent after the incident, as Josefumi mentions that he was abandoned.[3] Kiyomi at some point had a child, who was Josefumi's half-sibling.[4]

While at TG University Hospital, Kiyomi drops her phone while carrying her baby. Yasuho Hirose and Josuke Higashikata notice her after leaving the hospital. Yasuho helps her by picking up her phone on the ground. Thanking the two, Kiyomi leaves and walks to the hospital. Yasuho immediately recognizes the woman, and Josuke mentions that he already knew based on the descriptions given by Karera Sakunami and Tamaki Damo. Despite Josuke's assumption that Kiyomi had forgotten about her son after the earthquake, it's revealed that she is still looking for Josefumi and kept photos of him on her phone.[4]