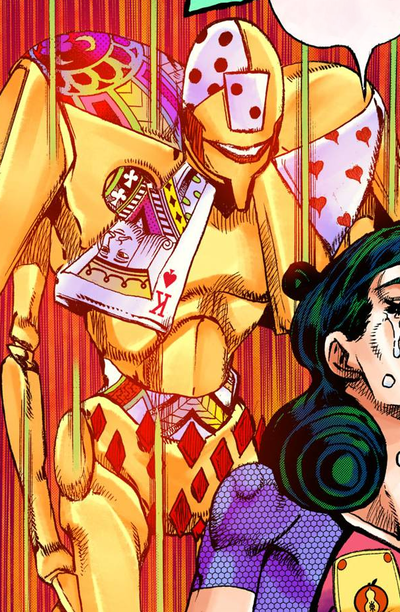 JJL Chapter 55 (Ability only)
JJL Chapter 107 (1st full appearance)
“
Space Trucking... can hide things in a space between a card and another card. They may appear to be being crushed, but... they're just hidden.
”
—Kaato Higashikata, JJL Chapter 107: When All Curses Are Broken

Space Trucking (スペース・トラッキング, Supēsu Torakkingu) is the Stand of Kaato Higashikata, featured in the eighth part of the JoJo's Bizarre Adventure series, JoJolion. It allows Kaato to store things inside her cards which she can summon out to attack her opponents. 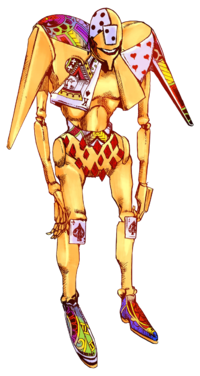 Space Trucking has a humanoid appearance with thin mechanical limbs. It has a large shoulder cape that extends beneath its chest, with long triangular shoulder pads attached to it that jut out perpendicularly to its arms. It has an egg-shaped head with a pointed protuberance extending from its chin. The top right side of its head is covered in a patch with a polka-dot pattern. Its face consists of a large smiling mouth and above it a rectangle resembling a 2-dot face of a die.

Space Trucking is bound to a deck of cards, from which it manifests its power. The deck itself is relatively ordinary, and bears the Higashikata Fruit Company's crest.

Kaato can store objects between the cards of her deck

Space Trucking allows Kaato to store objects and hide living things inside the space between her cards as if nothing was there. She can store objects that are considerably larger than the deck, as seen when she brings forth a chair to attack Joshu,[1] and even summons Tsurugi's whole body from them. It can also be used to immobilize people, as Kaato pins Toru to the floor by hiding his limbs inside her cards.[2]

Kaato explains that the objects hidden in her cards may appear to be crushed but in reality they are merely hidden. However, she is seen crushing the Locacaca branch in her deck to extract its sap.[3]