Jack the Ripper and Zeppeli the Strange (story arc)

Jack the Ripper and Zeppeli the Strange 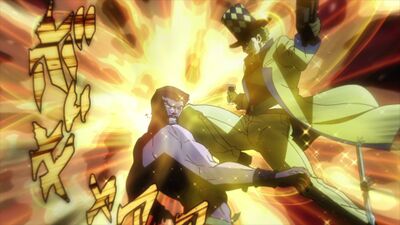 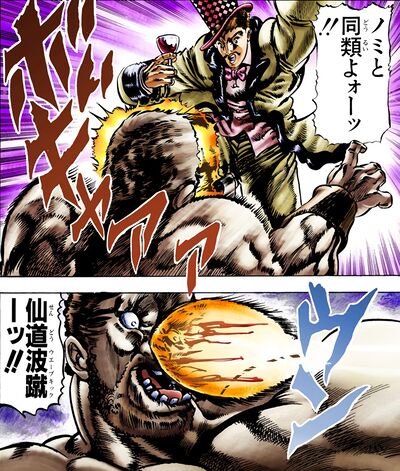 Jack the Ripper and Zeppeli the Eccentric

Volume 3
Jack the Ripper and Zeppeli the Strange (切り裂きジャックと奇人ツェペリ, Kirisaki Jakku to Kijin Tseperi) is the fifth story arc in Phantom Blood.

It narrates Jonathan's meeting with Will Anthonio Zeppeli, a user of the supernatural energy named Ripple, who tells him that Dio is still alive and teaches him to use the Ripple to fight Vampires.

One night in the Whitechapel district of London, Jack the Ripper has just murdered his latest victim when he spots two figures observing him. It is Dio and Wang Chan who are coming to the serial killer in order to recruit him. Dio charms Jack and makes him his servant. 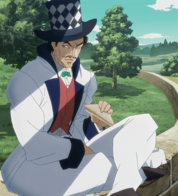 Meanwhile, Jonathan searches the ruins of his former home and worries about the Mask which he cannot find. To change his mind, Jonathan strolls with Erina and tries to mend their relationship. The two of them soon notice a man following them. Said individual suddenly leaps high and plunges his fist into Jonathan's stomach. Despite an initial great pain, Jonathan notices a surge of energy inside his broken arm, which he feels is healed now. The man introduces himself as Will Anthonio Zeppeli.[1]

Zeppeli takes Jonathan and Erina to a nearby pond where he demonstrates the power he used to heal Jonathan: the Ripple. Explaining the Ripple to be an energy akin to sunlight created throughout the body via breathing, Zeppeli shatters the stone in front of him with the frog resting on it unharmed. The Ripple user then explains that he's come to investigate the whereabouts of the Mask and destroy it. Having noticed that Wang Chan has disappeared, he then explains to Jonathan that Dio is alive and recovering and that he must fight Dio to save himself and mankind.[2]

For the next week, Jonathan trains under Zeppeli and learns of his mentor's tragic history with the Stone Mask which claimed his father's life while they were on their way home from Mexico. The following night, Jonathan is attacked by Wang Chan, who has become the first of Dio's Zombie followers. Jonathan uses the Zoom Punch technique to drive Wang Chan off, who retreats to the village of Windknight's Lot, where Dio has taken residence in the castle and is draining humans of their blood to heal his wounds.[3] After tossing the corpse of one of his victims for a zombified Jack the Ripper to eat, Dio learns of the Ripple energy from a wounded Wang Chan. Later, after Speedwagon acquires intel on Dio's whereabouts, he accompanies Jonathan and Zeppeli to Windknight's Lot.

Zeppeli landing a Sendō Wave Kick on Jack the Ripper.

The group's carriage enters the tunnel entrance to Windknight's Lot. However, the carriage suddenly stops and Speedwagon realizes that the coach driver has been murdered, stabbed in the back with multiple knives, and the horses have been beheaded. Jack the Ripper springs out of a horse.[4] As Jonathan and Speedwagon are shocked by the horrific display of Jack's power, Zeppeli calmly explains that Jack is a Zombie, one of Dio's minions. Zeppeli then explains the basics of a fight and correctly predicts that Jack will seal the exit of the tunnel to trap them. Indeed, Jack throws the whole carriage at the roof and makes the tunnel collapse. However, when Jack tries to send multiple knives toward Zeppeli, the latter simply spits wine bullets which cut the blades in two and, declaiming that humanity's greatest virtue is bravery, making one's fear's his own, Zeppeli knees Jack in the face, disfiguring the Zombie. The Ripple master then orders Jonathan to finish off the zombie.[5]