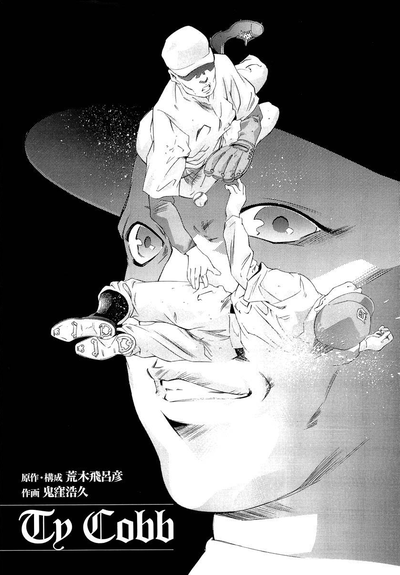 History's Greatest Hitting Machine! Ty Cobb (史上最高！強打製造機『タイ・カッブ』, Shijō Saikō! Kyōda Seizōki "Tai Kabbu") is the second chapter of The Lives of Eccentrics series, written by Hirohiko Araki and illustrated by Hirohisa Onikubo. It was originally published in issue 10 and 11 of Manga Allman on June 6, 2001, split into two parts.

The narrator presents himself as Horwood, a pitcher who entered the American League and was one of the best players of the league by 1912. However, Horwood then talks about the best player of his era, Ty Cobb.

In 1908 at Boston's baseball stadium in a match between the Boston Red Sox and the Detroit Tigers, Tyrus "Ty" Raymond Cobb openly declared that on the next pitch, he would steal second base. Rushing towards the player on the base, Ty Cobb easily went to second base and somehow caused the player to bleed from his arm. Despite the player's accusation, the steal was declared successful by the referee. This match became famous as Ty Cobb successfully pulled off his predictions. Ty Cobb, one of the greatest baseball players and pioneer of several techniques, was at his peak.

Ty Cobb was born on December 18, 1886 in Georgia. He was an athletic boy and dreamed of starting a career in baseball but his father, a state senator and school administrator, was against it because Cobb wouldn't earn much and because he considered baseball to be vulgar. However, when his father was killed by his mother under suspicious circumstances, Cobb was able to start his career and his personality changed drastically. He was the best player in his team and became arrogant and violent. When several of his teammates tried to gang up on him, he showed off a shotgun inside his baseball bat case. He also began to think himself as invincible when he accidentally shot himself with a shotgun but it didn't leave lasting injuries. Soon he became one of the most talented yet hated players in the league.

During one game, a spectator insulted him and he rushed to beat up the man, who happened to be paraplegic. Thus, he was suspended from baseball indefinitely but his teammates went on strike because he was too good to abandon and so, the suspension was called off the next day. However, there were suspicions that he threatened his former teammate into going on strike. Ty Cobb continued his reign until he was challenged by another player, Horwood. Horwood used a special technique named the spitball. With a hidden file, he made scratches on the ball which caused it to waver midflight, making it impossible for the batter to see clearly and Ty Cobb couldn't hit it despite the slowness of Horwood's throw.

Cobb tried to taunt Horwood by claiming he had slept with his wife last night and Horwood deliberatly threw his ball at Cobb's stomach, which caused a fight. However, Cobb had the last laugh as he drew a gun he always carried with him and intimidated Horwood with it, the brawl between the two teams covering him up. Horwood was forced to stop using spitballs and his fame faded rapidly. For his part, Ty Cobb solidified his legend of one of baseball's best players, established the basis of baseball contract dealings, invested in the Coca-Cola company and General Motors and so became extremely rich. On his deathbed, he still refused to hand out his gun and intimidated the doctors away. Ty Cobb passed away at the age of 75 from cancer.