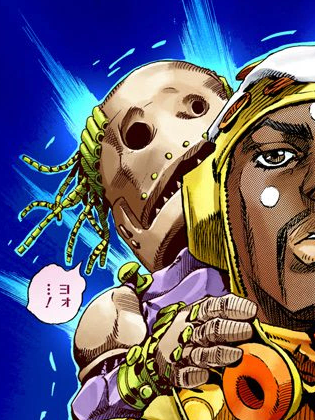 Hey Ya! (ヘイ・ヤー, Hei Yā) is the Stand of Pocoloco, featured in the seventh part of the JoJo's Bizarre Adventure series, Steel Ball Run. Gripping Pocoloco from the back, this dwarfish Stand encourages and advises its User through any hardship.

Hey Ya! is a roughly humanoid Stand. Its head is shaped as an upturned bucket, marked on top by three concentric circles, and malformed eyeholes of uneven size. It wears a wreath of many small, hollow cylinders, and its lips are pierced by a row of short nails.

The series is known for alternating colors between media, the information presented below may or may not be canon.
Body
(Beige head, hands, and shoes. Purple body. Green accessories and ornaments.)

As part of its ability, Hey Ya! is an overtly positive and friendly character towards its user. While a bit demanding with its requests, it nonetheless means only wellness towards Pocoloco, not unlike a trainer. Its capacity for speech serves almost-exclusively to boost Pocoloco's mood and confidence. One of its keywords is "luck", telling its user that luck is on his side, whether or not it is actually true, in order to motivate him.

Hey Ya! is a Stand with no apparent combat ability, whose only purpose is to talk to and advise its user. It is notably one of the few Stands in the part that did not originate from the Devil's Palm and is seemingly a physical manifestation of energy derived from a combination of Pocoloco's inherent qualities and his newfound confidence from hearing the prophecy.[1]

Hey Ya! is seen lurking about Pocoloco, whispering advice, motivating him to take advantage of his own luck. Despite the misconception that the Stand improves Pocoloco's luck, it doesn't do anything other than encourage its user and put them in a good mood.[2] Despite all this, Pocoloco begins having a string of fortuitous circumstances happen to him when he follows Hey Ya!'s orders through sheer coincidence. Hey Ya!'s motivation alone was powerful enough to drive Pocoloco to win the Steel Ball Run in the end.