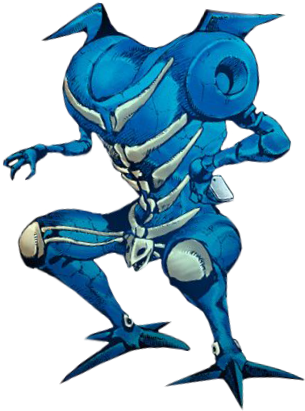 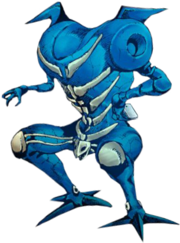 Blue Hawaii manifests as an oddly proportioned humanoid, lacking a head, with small, mechanical arms and feet bearing four pointy digits. The Stand's body is cracked all over, bones decorate its upper body and it bears an animalistic skull on its crotch; the bones on Blue Hawaii's body briefly manifest inside a victim's body when they fall under its control.[1] Blue Hawaii's shoulders are wide, with two appendages shooting out it from them resembling wings.

The series is known for alternating colors between media, the information presented below may or may not be canon.
Body(Blue body decorated in white bones.)

Blue Hawaii has the ability to take control of or possess a person or animal, so long as they have touched something that was at some point attached to the user.[2] For instance, Dolomite uses one of his teeth to take control of a young boy to attack Josuke Higashikata.[3]

When touched, a target will be invaded by Blue Hawaii, shown as its skeletal design mark their bodies. The contact must be physical: touching someone through a protective layer like a plastic sheet doesn't count, but physical contact with a controlled person's blood counts.[4] An organism who falls victim to the ability will be rendered into a zombie-like state and will relentlessly perform a specific instruction like chasing after a target,[2] or coming back to Dolomite, or any miscellaneous order.[1]

Once a person or animal is under Blue Hawaii's thrall, they themselves become a catalyst of spreading the infectious power. If the flesh or blood of an infected organism makes physical contact with another, the infection will transfer over. It appears that this Stand cannot possess more than one living being at a time, as an infected organism regains control after the infection is transferred to another.[3] The main weakness to this Stand's power is that those under Blue Hawaii's control can only move in a linear path to reach their target, unable to climb over or avoid obstacles in their path.[3]