Love to code, love to video edit, love to watch shows, love to play piano, love to do a lot of things...

“
Impossible? This journey has been full of impossible things... This is pointless, I'm tired of hearing about what's impossible.
”
—Jotaro Kujo

Gold Experience Requiem (or GER for short) may be one of the most misunderstood Stands in the JoJo community.

It's to be expected considering it only appeared for a short time, not giving much chance for its abilities to be properly realised. Unfortunately, such lack of canon information leads to vast fan theories, and thus misinformation spreads. To quote a very funny man, "In a society like this table, a state of equilibrium, once one makes the first move everyone must follow!". It seems as though many people have filled in their understanding of GER by taking in whatever popular explanations they come across, rather than coming to conclusions using the evidence provided by the series itself.

I've noticed how people are very quick to deny that Stands with Time Stop, Star Platinum and The World, are able to lay a finger on GER. This is due to popular theories about GER and its abilities floating around the community, some having no evidence behind them at all.

Given the vagueness of Requiem's dominion over souls, I'm not going necessarily debunk existing theories. Instead, I will mostly aim to prove how Time Stop could defeat Gold Experience Requiem, using fair assumptions based on what little we got.

As mentioned above, so much about GER, and Requiem in general, is unknown. This article only assumes what is most likely, based on what we were presented with in Vento Aureo – our best assumption of the Stand and its abilities.

This is but a possibility, and is absolutely not intended to be considered as fact. After all, we'll never really "reach the truth".

A great misconception in the Diavolo vs GER battle is Return to Zero – arguably GER's 'main' ability – interrupting King Crimson's Time Erasure. However, this is most likely false, as RTZ is implied to only have taken effect after the Time Erasure had ended. The 2 most obvious ways to tell this, is first how the anime visually shows Time Erasure ending before the effects of RTZ begin to occur. Secondly, for King Crimson to attack Giorno as intended, Time Erasure would have to end for things to be tangible again.

That being said, there is a counterargument in how RTZ didn't necessarily need to activate until Time Erasure ended, since Giorno was only in danger once Diavolo went for his finishing punch. While this is very possibly the case, based on what we were given in that scene, it's better to assume that RTZ cannot activate in Time Erasure. I could go on to talk about GER's lack of reaction to Diavolo spraying blood over Giorno's eyes, but the vagueness of what defines an 'attack' for RTZ to automatically activate makes this action illegible as evidence for this topic.

So from what we were shown, it is most likely that RTZ only activates from the moment it is possible for it to do so. Arguably, erased time still has time 'moving', so if RTZ can't take effect there, there's it's safe to say that it can't take effect inside of Time Stop.

Considering how Diavolo activating King Crimson's ability didn't trigger RTZ, it is highly unlikely that the activation of Time Stop would be interrupted. This means that during the duration of one's Time Stop, Giorno and GER are left vulnerable.

But how can GER be defeated before time resumes? 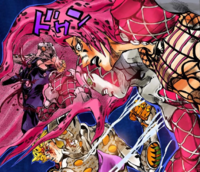 While GER possesses high levels of strength, and likely durability, it definitely isn't invincible. This is apparent from Epitaph's vision where King Crimson successfully punches through Giorno's stomach.

This implies that one way or another, without Return to Zero, Giorno can be killed with GER. This means that, assuming Giorno can be damaged to the point where he dies instantly after time resumes, RTZ probably wouldn't be able to save him.

But that'd be too easy, so let's assume that RTZ would activate fast enough to restore Giorno anyway. Luckily, there is still an alternative possibility...

Giorno picking up the Arrow post-victory

One incredibly important detail from the end of Vento Aureo is how Giorno can be seen picking up the Arrow from the ground after GER is defeated by Diavolo.

This heavily implies that once GER had served its purpose, the Arrow 'fell out' of it, likely devolving the Stand.

This claim is further supported by the following Joestar family tree from Part 6, Stone Ocean: 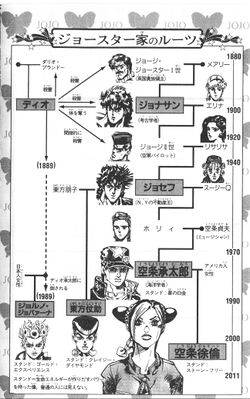 As can be seen, Giorno is noted as having the Stand 「ゴールド・エクスベリエンス」(Gold Experience) and not Gold Experience Requiem. The same is true for other Joestar family trees, including GioGio's Bizarre Adventure and Ripples of Adventure.

This would lead us to believe that without the Arrow inside of it, GER devolves back to its original form, Gold Experience. Therefore, if a Stand, such as Star Platinum, was to rip the Arrow from GER's head (assuming it actually is there), it's within reason to believe that GER would devolve and Return to Zero would not commence once time resumed.

A common counterargument to this theory is Chariot Requiem persisting despite not fusing with the Arrow. However, the Arrow wouldn't go through the trouble of merging with Gold Experience if it didn't need to... right? Of course, the other factors such as Chariot Requiem's user being dead and the Stand going rogue make basing Requiem rules off of it unreliable. Plus, generalising Requiem is usually unreliable since we only got 2 instances of it happening, both of which had different results from each other.

It's inevitable that this theory is full of speculation, but hopefully this has at least given what is most likely.

Can Time Stop beat Gold Experience Requiem? Most likely, yes, it can. Funny how despite all the new crazy abilities we've gotten across JoJo's serialisation, the OG Star Platinum (and The World too) still holds up.

Well, I respect your ideas, but I have to fully disagree in numerous ways. I'll go through each of them by section.

I hope this clears some things up. It is a bit scatterbrained of ideas, but it should sum up most of my thought process, if you need clarification, please let me know since I am always willing to discuss things like this.
Permalink
You are ignoring the author of this comment
Show comment | Manage ignore list

Thanks, I was waiting for someone to give disagreements lol

I plan to update this later with better-shown evidence and updates to my reasoning, including changes based on your valid points.

I should also reword the post to more fit "how Time Stop could beat GER" rather than "can". I'll ping you if I have any questions

btw, my discord username differs from this one, so ping @Kojo in the jojowiki discord if you want
Permalink
Categories: