Destructive Power
∅
Speed
E
Range
C
Stamina
B
Precision
E
Developmental Potential
E
A
B
C
D
E
A: Very Good
B: Good
C: Average
D: Poor
E: Very Poor
This Stand may sometimes be referred to as "Tattoo You!".
“
Those guys came out of the 'mark' on that man's back! That's what this 'Stand' does!
”
—Johnny Joestar, SBR Chapter 47: The Promised Land: Sugar Mountain, Part 3

Its appearance may come from a tattoo that Hirohiko Araki once saw somewhere.[1] He also suggests that each of the men are labelled in a cardinal manner, suchlike Tatoo 1 (タトゥー, Tatū Wan), Tatoo 2 (タトゥー, Tatū Tsu), and so on.[1] 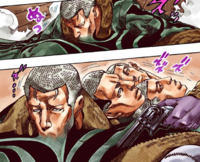