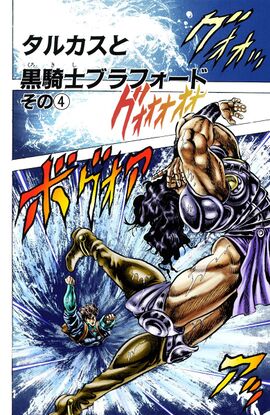 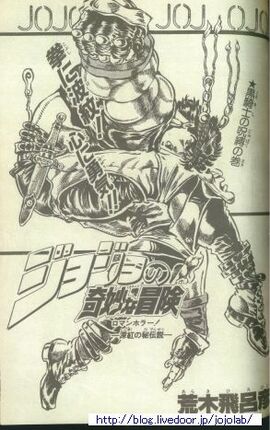 Bruford manages to escape Jonathan's Ripple by backflipping onto land and receives only a scratch. The knight tells Jonathan that he wishes to fight him on equal grounds, without handicaps, because he thinks Jonathan has the skill of a hero. Jonathan in turn notes Bruford's demonstration of his chivalry and pride. With a mighty battle cry, Bruford leaps toward Jonathan and attacks Jonathan with his hair once again. Jonathan tries to counter the attack with an Overdrive barrage, but fails and becomes ensnared in Bruford's hair. Bruford lifts Jonathan off the ground and begins draining his blood using the turgor pressure of his zombified hair.

Unable to transmit the Ripple through his hands, Jonathan cannot prevent his blood from being drained. As Bruford's hair tightens around his body, he loses the ability to draw breath. Speedwagon attempts to intervene, only to be blocked by the sudden appearance of Tarkus. Zeppeli steps forward warily to confront Tarkus.

Jonathan, seemingly at the mercy of Bruford's hair, appears to be facing his end as Bruford draws his sword. Then, just as Bruford swings his sword, his hair loosens up just enough for Jonathan to kick the sword. The weapon conducts Jonathan's Metal Silver Overdrive and transfers the Ripple power into Bruford's right arm causing it to melt off. While Bruford is still stunned, Jonathan uses the Sunlight Yellow Overdrive to deliver consecutive blows to his opponent.