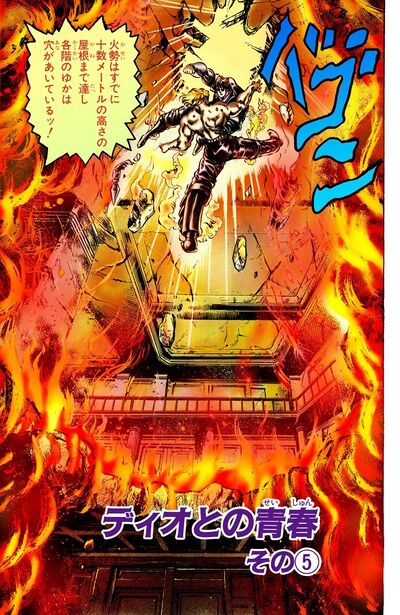 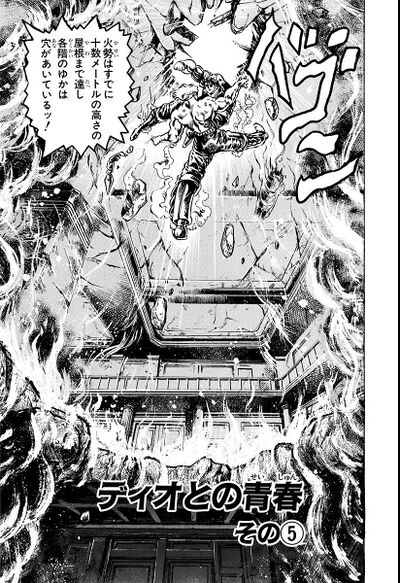 Dio to no Seishun Sono 5

Jonathan falls with Dio all the way down to the first floor of the burning mansion. Jonathan reflects on how Dio has tortured him, and how up to this moment he has lost everything but his own life because of Dio. With nothing else to live for, JoJo is more than willing to die to stop Dio's ambitions. Dio, however, shows more concern for his life, realizing that even he can not withstand the flames at the core of house. To escape Jonathan's grasp and his own death, Dio knees Jonathan in his ribs, breaking several of them. He grabs the wall, and leaves Jonathan to fall to the first floor alone. Dio thinks to himself that with the power Jonathan has given to him, he can take over the world at his leisure.

Jonathan continues to fall, but then notices something else falling with him—the bent iron spearhead. Thinking quickly, Jonathan jams the spearhead into the wall and swings his body to get on top of it before jumping back to where Dio is hanging. Though Jonathan's jump falls just short of Dio, he uses his belt to catch Dio's leg. The added weight of Jonathan’s body causes the part of the wall that Dio grabbed to fall out, and they begin to fall together again.

Jonathan resolves aloud to not let go of Dio again, and reveals the knife that was used to kill his father. Jonathan stabs it between Dio's ribs and grabs onto him. Dio retaliates by breaking both of Jonathan’s arms; however, Jonathan does not let go, despite the obvious pain. Screaming out to his father to give him strength Jonathan kicks off one of the burning, walls. The kick sends them in the direction of the statue of the Joestar guardian deity, the goddess of love. Dio, is impaled through his chest by the statue, and can not remove himself causing him to burn in the fire.

Speedwagon continues to watch the mansion burn from the outside. Just as he questions the cruel fate of Jonathan Joestar, JoJo's unconscious body is sent out of the burning building. Between the impact of throwing Dio onto the statue, and being thrown in the direction of the window, Jonathan miraculously survived.

Speedwagon determines that Jonathan has won, and Dio has been defeated.

Author's Note
“
Next week's chapter is partially in color! My schedule is tight, but I'll just have to roll up my sleeves and get drawing. Please continue to believe in me.
”
—Hirohiko Araki
“
来週はパートカラーです！スケジュールきついけれど気合いを入れて描きます。ヨロシク
”
—Hirohiko Araki