Jack the Ripper and Zeppeli the Strange, Part 2 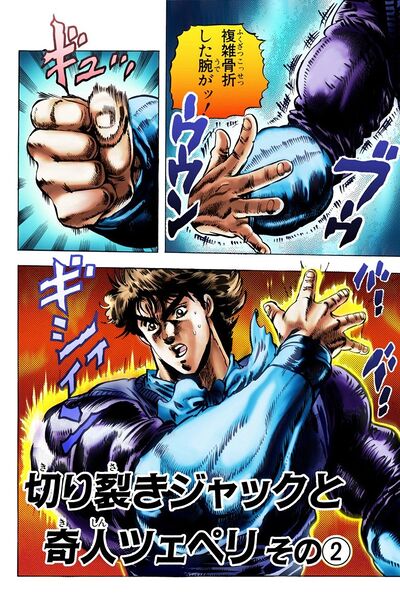 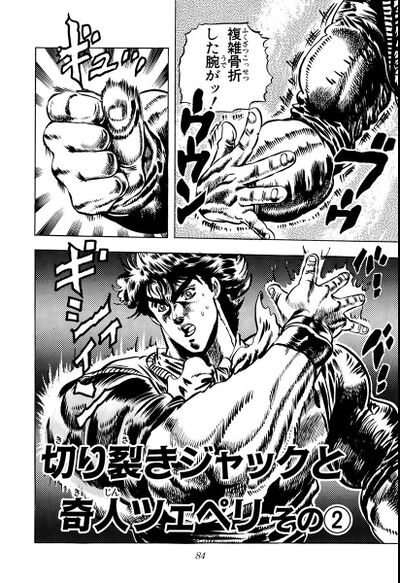 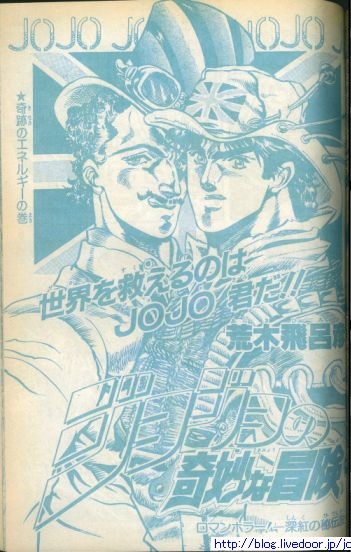 To Jonathan's surprise, his fractured arm is completely healed from Zeppeli's strike. Jonathan questions how he did it, but Zeppeli claims that it wasn't him who healed it, but, rather, Jonathan's "breathing". Zeppeli begins casually shaking pepper onto his sandwich, but ends up sneezing, falling off the wall. Jonathan runs over to look behind the wall, questioning why Zeppeli healed him and how he knew his name, but the man is not there. When Jonathan turns again, Zeppeli is standing behind him. He asks Jonathan not to ask more than one question at once, and to follow him in order to have them all answered.

Zeppeli brings Jonathan and Erina to a small river and directs their attention to a frog sitting on a rock. He reveals to them a breathing technique that he had studied for many years called Sendō, which means "the Way of the Hermit". Zeppeli walks into the shallow river and takes a deep breath. Energy begins to form around his feet, and unusual ripples in the water begin to emanate from where he stands. Jonathan questions what the ripples are, to which Zeppeli replies that he adjusted Jonathan's respiration when he stabbed his finger into his diaphragm earlier, which allows Jonathan to do the same thing.

Zeppeli explains that breath and blood are connected. Basically, blood carries oxygen to and from the lungs, and blood is connected to your cells. Cells make up the human body as a whole; therefore the ripples on the water are similar to how breathing makes ripples in the body. Using this ripple, one can create an energy called the Ripple that can be transferred to other objects. With that said, Zeppeli throws his fist towards the frog and lands a direct blow to its back. Jonathan and Erina are surprised as the strike splits the rock the frog was sitting on down the middle, yet the frog remains completely unharmed. This was the power of Sendō. Zeppeli's energy had transferred as ripples through the body of the frog and crushed the rock instead.

Zeppeli explains that he had actually learned this technique in order to battle the Stone Mask, saying that they are two sides of the same coin. He reveals that Dio is still alive and currently in possession of the Mask. Zeppeli has been searching for the mask for decades in order to destroy it, which is why he had researched and mastered the art of Sendō. Sendō is the only way to destroy the mask. He claims it is Jonathan's fate to do battle with it, and he must be trained in the art of Sendō. Jonathan is confused by the number of things he has just been told, and grabs a nearby branch from a tree. Jonathan inwardly tells himself that at this point, he must not involve Erina any further.

Zeppeli notices that the dead flowers on the branch Jonathan grabbed begin to bloom. He realizes the Ripple energy he used to heal Jonathan's broken arm had remained there and revived the flowers. Due to this amazing feat, Zeppeli expects that Jonathan holds incredible talent and power within him. He feels that with the right training, Jonathan may be able to save the world from the power of the Mask.