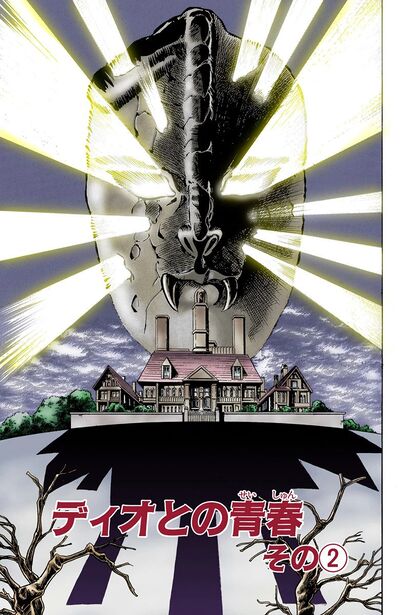 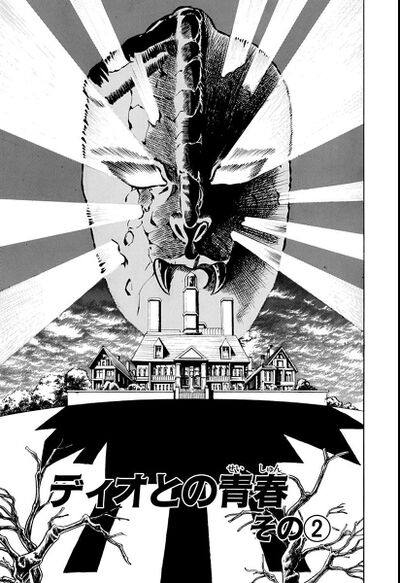 Dio to no Seishun Sono 2

Jonathan, who has enveloped his deceased father in a drape and aid on a table, Speedwagon and the police officers are shocked that Dio is alive after having been pierced by several bullets earlier. Speedwagon proceeds to tell the police to shoot Dio again; Jonathan too picks up a pistol and points it at Dio telling him to stop his approach.

Though Speedwagon urges Jonathan to shoot Dio, he is ultimately unable to pull the trigger. As the vampire closes in, Speedwagon himself shoots a bullet through the right side of Dio's head. However the bullet doesn't do any damage or even slow him down. Dio then gloats that the Stone Mask, and George Joestar's blood have given him incredible power. Jonathan ponders Dio's words, wondering exactly how the Mask had changed him and if that had indeed been the cause of his transformation.

Dio, having jumped to the ceiling and hanging on it, pierces the forehead of another police officer with his fingers and proceeds to drink his blood, draining his life. He then throws the man into the rest of the police officers, who are killed and dismembered by the impact. One of the officer's legs hits Speedwagon in the arm and breaks it. Seeing the destruction wrought by the now inhuman Dio, Jonathan admits that he is terrified by this new power; but since it was his Mask and research that gave birth to it, he has to be the one to end it. He takes the spear from a suit of armor nearby, and prepares to fight the vampire.

Author's Note
“
I'm planning to read a lot of horror stories and other materials as reference. If you've got a scary book in mind, please let me know!
”
—Hirohiko Araki
“
資料にとホラー小説など読み漁ります。コワ〜イ本がありましたら、ゼヒ教えて下さい！
”
—Hirohiko Araki