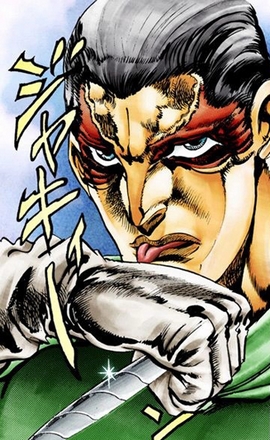 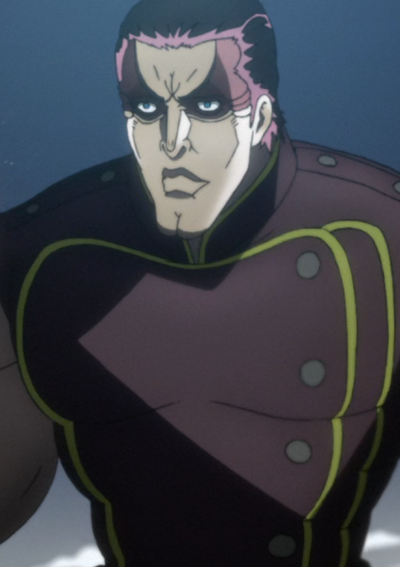 Episode 11
“
You plan on fighting me, Donovan, Nazi SS Commando, with your bare hands?! I'm slightly offended, but that's beside the point! Let's chalk it up to youthful foolishness!
”
—Donovan, Chapter 55: The Pillar Man, Santana, Part 2

Donovan (ドノヴァン, Donovan) is a tertiary antagonist featured in the second part of the JoJo's Bizarre Adventure series, Battle Tendency.

As an elite member of the Nazis, Donovan is ordered to capture Joseph Joestar in the Mexican desert to retrieve information about Straizo.

Donovan is a tall athletic man with a muscular build. He has short dark slicked-back hair, a wide nose, and a long chin. Donovan has facial markings around his eyes, extending up toward the corners of his forehead. There are also several wrinkles around his eyes. In the anime, he has a cleft chin. He wears a sleeveless officer uniform along with arm warmers and gloves.

Donovan is a sadistic and conceited Nazi soldier. He is confident about his abilities and looks down on those younger than him. He specializes in torture, claiming that he would drain Joseph's blood without killing him. After assuming he is victorious, Donovan mocks Joseph, demanding that Joseph says that Donovan was right about their gap in strength.

Although he is prideful about being an elite military man who would never talk under torture, this proves to be a facade, as Joseph quickly makes him talk about the Nazi base just minutes after Joseph inserts a compass into his eye.[1]

Donovan is an elite German SS commando and thus has several talents related to trailing people. 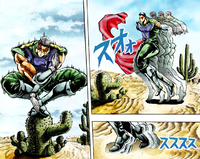 Donovan has remarkable stealth skills. He is able to move lightly enough to avoid leaving footprints in sand and claims that he can sneak up on wild bats. As an elite soldier, he is also agile and flexible. He can balance atop a cactus using the flat edge of a knife and is skilled at battling in mid-air, tending to strike his opponents from above.[1] 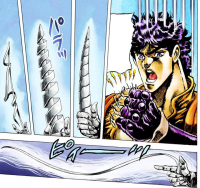 Donovan is equipped with a knife that appears to be wrapped in a special cloth which can unwind and be used much like a whip. He wraps it around Joseph's neck.

Although he uses his knife in the anime, he does not unwrap it to use the whip.

While Joseph travels through the desert in Mexico in his search for information about Speedwagon, he suddenly spots a large cape floating down toward him. Suspecting it to be related to his sense of being followed, he sends it flying and reveals a man with a knife, who immediately attacks. After a short back-and-forth, the man reveals himself to be an SS Nazi officer sent to capture Joseph in order to acquire information on Straizo.

Donovan charges toward Joseph, who throws his cape back at him and then punches it. However, Donovan reveals that Joseph had actually punched a cactus instead, while Donovan was balancing on top of it using his knife. Donovan then unwraps the cloth on his knife and extends it into a whip. He ties the whip around Joseph's neck to pull himself closer before kneeing Joseph in the face. He steps on Joseph and mocks him, but Joseph turns the tables by using the Ripple on a cactus to launch its spines at Donovan. Joseph demands information, but Donovan refuses. Joseph then sticks a magnetic compass in Donovan's eye, and he quickly tells Joseph that Speedwagon is alive.

Donovan tries to make a run for it as Joseph gets ready to leave on his motorbike. However, Joseph easily catches him and ties him to a cactus with a note reading "Hello Adolph!"