Fixed to Magent Magent's shoulders, it protects him from all harm as long as he is sitting still on the ground. In this state, Magent Magent is completely immune to all attacks, but unable to move at all.

20th Century Boy generally resembles a hollow piece of armor, composed of a headpiece, two large shoulder pads from which hang two long, branching straps, and a shell at its back from which grow two more, comparatively plain straps.

Blank-eyed, its head bears two long, vertical antennae; a bolt runs through it from shoulder to shoulder; and it is marked by a motif resembling a small hand of three simple fingers, both on its head and at every end of its branching straps.

The series is known for alternating colors between media, the information presented below may or may not be canon.
Body
(Blue head and shoulders, cyan antennae, eyes, and straps.)

20th Century Boy has no special offensive capabilities, but its defense is exceptional. Although Magent Magent must be immobile in order to become invulnerable, there is no way to bypass its defense.

As a result, only sneak attacks and turning the immobility against Magent Magent are effective against him. 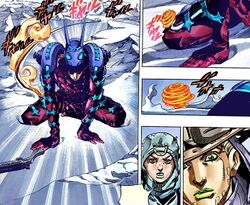 Whenever Magent Magent activates 20th Century Boy and kneels on the ground, he becomes impervious to all damage.[1]

All energy and incoming projectiles are redirected away from Magent Magent into the earth or air, making him immune to any damage, be it from Stand attacks, Steel Balls, bullets or explosions.[1] It even protects Magent from other dangers like drowning.[2] 20th Century Boy's ability has been explained as belts stretching out like earthing wires, and redirecting all the energy from enemy attacks into the ground.[3]

Demonstrated first against blows from Gyro's Steel Balls, this ability proves effective in the direct midst of attack when a bullet already beginning to pierce its user's face is deflected.[4]

The downside of this ability is how it is activated, requiring Magent Magent to expose himself or stay immobile. Thus, one can lure Magent into dropping his guard and know that he won't be able to react to sneak attacks fast enough to retaliate, or take advantage of Magent's immobilization to lure him into a precarious situation and thus trap him.[2][4]