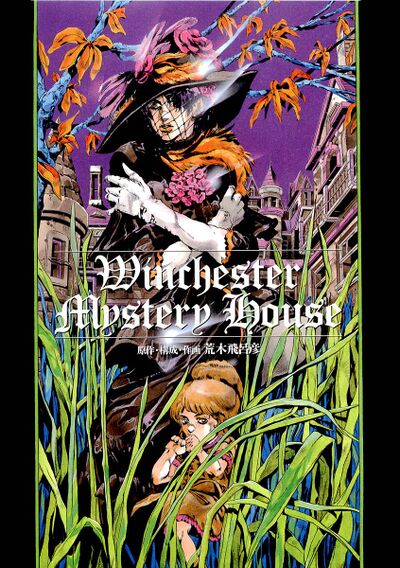 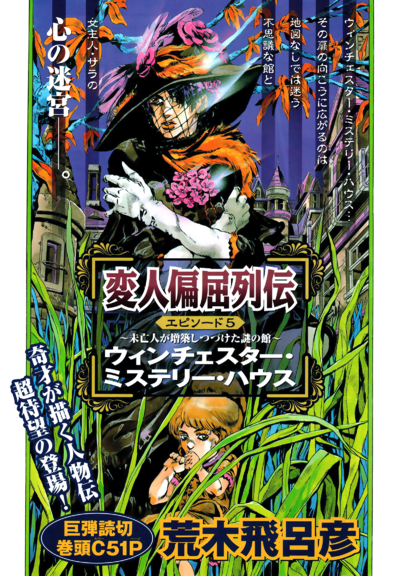 The Mysterious Mansion the Widow Continued to Build: Winchester Mystery House (未亡人が増築しつづけた謎の館 『ウィンチェスター・ミステリー・ハウス』, Mibōjin ga Zōchiku-shitsuzuketa Nazo no Yakata "Winchesutā Misuterī Hausu") is the fifth chapter of The Lives of Eccentrics series, written and illustrated by Hirohiko Araki. It was originally published in the August issue of Ultra Jump on July 19, 2003.

It's based on the real-life story of the Winchester Mystery House and it's owner, Sarah Winchester, an American woman who continuously had the house built with so many confusing rooms and passageways such that the vengeful spirits that haunted her would be kept at bay.

On April 18, 1906, a major earthquake with a magnitude of 7.8 struck the city of San Francisco. According to the reports, Sarah Winchester was trapped in her bedroom for several hours, stuck under 5-7 wooden pillars that had collapsed from the roof, with furniture blocking all the escape routes. The house that she lived in was a huge mansion with complex maze-like rooms, even she called for help, no one would have been able to hear her.

The house was still under-construction, despite not being built recently. It had been under constant construction for the past 22 years. From midday to midnight, the sound of hammering could be heard from the house. The owner of the house was Sarah Winchester, the widow of William Winchester of the famous Winchester Repeating Arms Company. Heiress to the company, she inherited her husbands wealth and used it construct the house.

Sarah Winchester (born Sarah Pardee) was raised by one the wealthiest families in Connecticut. Both beautiful and well educated, she was loved by everyone and lived happily married to her husband, William Winchester. But, her happiness would be short-lived, as she would go on to lose her newborn daughter, her husband and then her family one after another. Losing all reason to live, she is approached by a fortune teller while in Boston who tells her that there are vengeful spirits conspiring against her, and that they will prevent her from meeting her loved ones in the afterlife. The fortune teller tells her that she must buy a a large maze-like house in the West and "continue building that house" if she wants to keep the spirits that haunt her at bay.

Sarah heeds the fortune teller's warnings and begins constructing a house in San Jose, California. She proceeds to have a extremely large seven-stories tall mansion built, disregarding all conventions in order to make as confusing and maze-like as possible. For instance, it had secret corridors, rooms within rooms, doors leading to nowhere and so on.

One night, Sarah is attacked by a spectral hand in a bag of refuse. As she prepares to go to bed, she smells something and looks out the window, only to be attacked by the vengeful spirit. The hand grabs her hair and she must open the window and use a razor to escape its grip, letting the spirit in, and granting him a weapon when he snatches the razor. Sarah baits the spirit into a wall hidden behind a door and seemingly crushes it. She rushes to her phone to call the fortune teller, who is unfortunately attacked by another hand and can only tell her to run because of an imminent earthquake. The earthquake happens and destroys part of the house, burying Sarah in rubbles just as the ghostly hand catches up to her. However, it is then that the real Sarah Winchester comes out of the floor and pulls the body double to safety. In the secret passage, it is revealed that Sarah and his butler have been switching places at night to confuse vengeful spirits. The butler confesses his love for her but Sarah rebuke him as she doesn't want the curse of the Winchester to fall on him.

The narration ends by narrating the consequences of the earthquake and summarizing Sarah Winchester's life after the events of the story, also raising the question of whether building that mansion brought her any happiness.