From JoJo's Bizarre Encyclopedia - JoJo Wiki
(Redirected from Schottky No.2)
Jump to navigation Jump to search 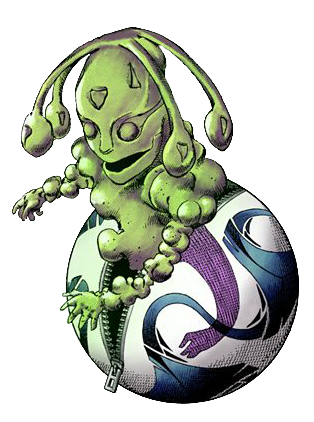 Schott Key No.2 (ショット・キー, Shotto Kī Nanbā Tsū) is the Stand of the younger A. Phex Brother, featured in the eighth part of JoJo's Bizarre Adventure, JoJolion. It is a small doll-like Stand that resides inside of a ball and it generates a potent poison gas.

Schott Key No.2 is a small doll-like Stand made of a dark poisonous gas. It is vaguely humanoid, its head stuck to a bubbling amorphous body, with triangle-shaped marks on the head and four similarly marked antennae protruding from the top of the head.

It is kept contained within the younger A. Phex brother's soccerball (football).

The series is known for alternating colors between media, the information presented below may or may not be canon.
Body(Lime)

To seal Schott Key No. 2, the younger brother must keep it hidden inside his soccerball. Fortunately for the A. Phex Brothers, the younger can expertly manipulate the ball with his body to juggle and attack.

The younger A. Phex brother is notably not immune to his own poison. Thus he hides his Stand inside a soccerball which he throws or kicks at the enemy.[1]