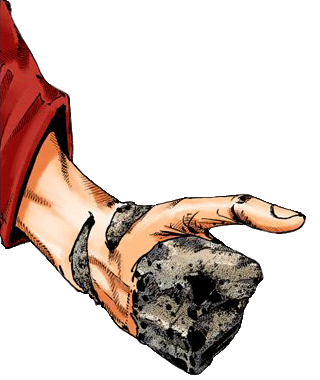 Schott Key No.1 (ショット・キー, Shotto Kī Nanbā Wan) is the Stand of the elder A. Phex Brother, featured in the eighth part of JoJo's Bizarre Adventure, JoJolion. Taking on the appearance of a rocky stump, it allows the elder brother to transfer anything from his left hand to his right hand.

Schott Key No. 1 is an ability Stand and thus has no physical power to speak of. Although its power may be useful in close combat, it has limited offensive ability. The elder A. Phex brother relies on the environment or Schott Key No.2 to be able to attack and is defenseless against other conventional Stands. 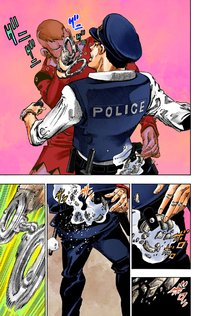 The elder brother transferring a cuff into his right hand stump

The objects transferred between hands seem to crumble away like rock and recomposes near the right stub, enabling the elder to slightly displace objects. Schott Key No. 1 can transfer anything regardless of physical state: it could transfer a metal handcuff, a hand (indirectly forcing the arm to move),[1] liquid gas, wires,[2] or even glass. The elder brother can make it so the transferred object materializes in a manner advantageous to him, for instance, causing straight wires to appear directly binding an enemy.[2]