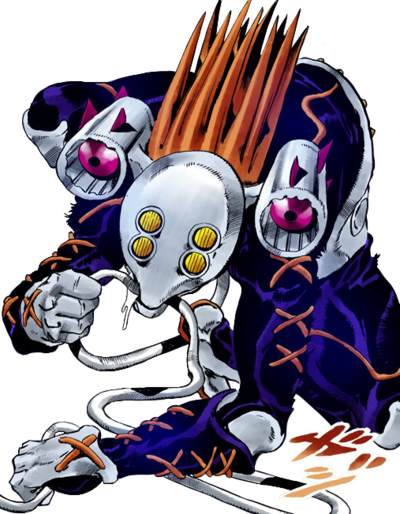 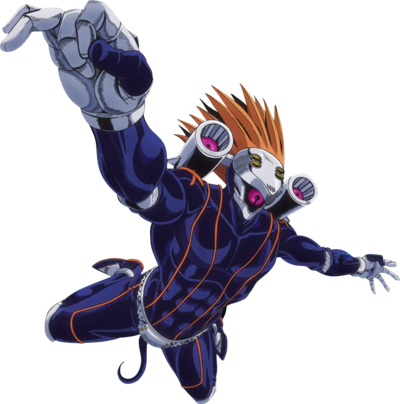 Destructive Power
?
Speed
?
Range
?
Stamina
?
Precision
?
Developmental Potential
?
A
B
C
D
E
A: Very Good
B: Good
C: Average
D: Poor
E: Very Poor
“
The puzzle is this... Would we ever be able to reach the child? My guess is that we'd never be able to.
”
—Narciso Anasui, SO Chapter 86: Awaken, Part 2

Green, Green Grass of Home (グリーン・グリーン・グラス・オブ・ホーム, Gurīn Gurīn Gurasu Obu Hōmu) is the Stand of the Green Baby, featured in the sixth part of the JoJo's Bizarre Adventure series, Stone Ocean. It is a relatively small humanoid Stand that protects the Baby by shrinking any person that approaches the baby.

The Stand resembles a humanoid in a dark, tribal bodysuit with a mask with four eyes. It has two turbine-like constructions mounted on the sides of its head. Long spikes sprout from the top of its head.

Its size is roughly equal to one-third that of the average plastic water bottle.

Green, Green Grass of Home automatically protects its user the Green Baby through its esoteric power. Although it is small by nature, if a perceived enemy approaches the Green Baby enough, it will eventually tower over them, making any inherent difference irrelevant.

Green, Green Grass of Home is rather cunning and is shown to exploit its power and the environment around it to its advantage in order to kill its enemies.

The Stand becomes larger than Jolyne and Anasui

Green, Green Grass of Home causes everything around the Green Baby to shrink the closer they are to it.[1]

Beginning at an undisclosed distance from the Green Baby, anything, be they objects or people, is reduced in size proportionally to their proximity to the Baby. If someone halves the distance their size is halved as well. As such, it's impossible to actually reach the Green Baby. If someone moves away from the child, they will grow back appropriately.[2]

Should a person get close enough to the vanishing point, at a point close to the child, Green, Green Grass of Home will manifest itself and attack them.[2] Although it can force its victim onto the Green Baby, supposedly attempting to wipe the person from existence as they vanish into an infinitely small size, it can eventually resort to killing target through more conventional means, such as using its towering size compared to the shrunken victim to crush them.[3]

If the Baby becomes interested in something or someone and goes to pick it up or touch them, they will automatically return to their normal size.[3][4]