From JoJo's Bizarre Encyclopedia - JoJo Wiki
Jump to navigation Jump to search
This page is a translated version of the page Spice Girl and the translation is 0% complete. 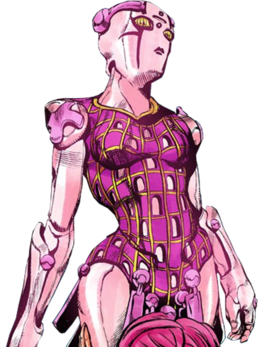 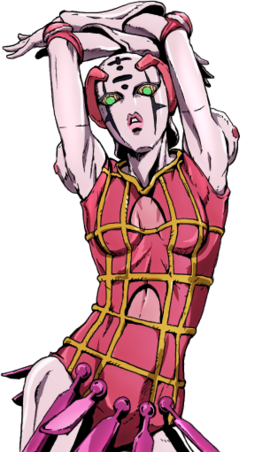 Destructive Power
A
Speed
A
Range
C
Persistence
B
Precision
D
Developmental Potential
C
A
B
C
D
E
A: Very Good
B: Good
C: Average
D: Poor
E: Very Poor
“
And now, you are able to soften any object in the world! That which is soft is more unbreakable than any diamond!
”
—Spice Girl, Chapter 538: Notorious B.I.G, Part 6

Spice Girl (スパイス・ガール, Supaisu Gāru) is the Stand of Trish Una, featured in the fifth part of the JoJo's Bizarre Adventure series, Vento Aureo. It is a feminine-looking humanoid Stand with the power to soften any object, giving them elastic properties.

It has several mathematical signs on its body: Two plus signs rest on its shoulders, two on its elbows and one on its forehead, followed by a division sign on its brow and a multiplication sign on its crown. Its face is without a nose and has black streaks running vertically across its eyes. In some panels, it is drawn with irises, but in the majority of its appearances in the manga (and in all its depictions in other media such as video games and figurines), it lacks them. In the colored manga and video games, it is depicted with golden eyes, while the anime depicts it with golden scleras and lime green eyes.

A rare feature among Stands, Spice Girl is fully sentient and has a mind separate from Trish's.[1] It primarily speaks in keigo