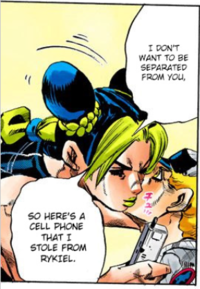 I'm Ointment. I've been a JJBA fan since mid-2019. My favorite parts are 6 and 8. I'm caught up with the manga, but I haven't read any of the light novels cause I'm lazy. I edit the wiki to cope with the release schedule of Jojolion. I especially love the more unique/bizarre Stands in the series, meaning I actually kind of enjoyed Dragon's Dream. Interestingly, I have almost the exact same height, weight, and build as Jolyne. Given, she's a little taller and way hotter than me. I make some killer chocolate chip cookies, and I drink almost nothing but seltzer water. I love PC gaming.

Note that I'm basing these on their own parts. Jotaro would be higher if I counted part 6.

As of Chapter 94, Yasuho is in a pretty rough spot, I think we can all agree. However, I would be extremely disappointed if she actually dies, and as a result I've formulated this theory, partially to cope, but it does have some level of merit, I think. Also, I feel like her death would be unusual narratively, since Gappy isn't even around to see it right now. My thesis: Yasuho's life will be saved by Paisley Park Act 2. Consider a few points:

Put all of this together, and what do I conclude? Paisley Park, Act 2. A Hirose on the brink of death is reminded of an idea she came up with which would result in a great functionality boost to her Stand. This certainly isn't as well supported as the Coronation theory, but I like Yasuho and don't want her to die, especially not at this point in the story.