Jump to navigation Jump to search

Content is available under Creative Commons Attribution-ShareAlike unless otherwise noted.

Hi Vish! As you know, I am creating a page for the Heaven Plan. I saw that the policies for editing discourage speculation when writing articles, but since much of the Plan is vague, I don't think I can avoid speculation when it comes to the history and DIO's personal reasons for creating the Plan. I was wondering if any speculation at all is acceptable on topics with vague areas like this one. Since there will most likely be an influx of new users coming to learn more about Part 6 after the anime finishes, I wanted to give the most concise explanation for the Plan as I could. If you'd rather I avoid speculation, that's totally fine. If I come to a part of my page that isn't explained well in the source material, should I just write nothing? Thanks!

Yeah, since it's speculation you shouldn't include it. Though I discussed about this page with the other mods and editors and we think that the DIO's Diary page already covers the things here. We could probably just make a redirect for Heaven Plan that goes to the diary page.

Ok, thank you for the clarification. I guess I'll stop working on the page but I'll save it somewhere just in case. What I might do is go the the DIO's Diary page and give the "Corresponding Events" section more context if that's something I can do as an alternative. I think taking the bullet points and making them into a normal paragraph would be more suitable, but what do you think?!

Do you know what the japanese letters plastered over F.F in episode 17 at 17:40? I wanted to add them to the manga/anime differences, but I don't really know the japanese alphabet so I was hoping you'd know. Thanks in advance!

Where is Walking Heart on the JJL 110 cover?

Underneath King Nothing on the left side. You can see the side of its head. The full face is visible in the uncropped artwork: 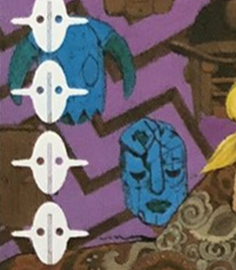 That's the same golden lamborghini that Josuke won from Jobin

Hey, this might be a bit of a weird question, but do you happen to have an uncleaned version of volume 10's reverse cover art, with color and all? This one: https://jojowiki.com/Volume_10 I saw that you're the one who uploaded it, so I thought I might try my chances. Thanks.

Sorry, I don't have the back cover. That clean cover art uploaded in the gallery just comes from an art book. It was also used in this Weekly Shonen Jump cover.

Do you know which art book?

In the raw Japanese scans of the JoJolion chapters involving Johnny's son George, was it directly stated that he's the Third George Joestar instead of the Second George Joestar? And if that is the case, what happened to the latter? Is he Johnny?

Yeah, the raws in the family tree chapter say George III in multiple panels. I only found out after seeing a photo in the old official app. JOJOVELLER also says George Joestar III on the map. No idea who George II is in the SBR universe. Maybe it's Nicholas but it was never officially stated

Does it ever state that Johnny's father, George is the First George Joestar? It might be possible that he's the Second George or there was another family member bearing that distinction whether it's another brother or a cousin of Johnny. Part of me thinks that this is one of the few times Araki might have forgotten or made an accidental oversight.

You're right. Looks like it's only mentioned that Johnny's father is George II on this family tree.

Stop undoing all my edits just to spite me

Response to you,Why would Vish spite you?

Um...Why am I being notified this,This isn't my talk page?

Maybe you have my talk page in your watchlist for some reason. Check if the blue star icon on the top of the page is highlighted.

I recently made an edit to the Ermes trivia page and I was wondering why you removed my edit?

That’s a dumb rule. But whatever.

Hello there. I saw you edited my section on the soundtrack describing the name changes and i was wondering why? The name changes i labelled were correct and in the in-game BGM viewer as i stated in the edit. Why did you change the names from what i added? Just wondering and slightly annoyed

I checked my game and my corrections were the names that I saw. I could show you screenshots as proof if you want. Vanilla Ice's was definitely wrong before.

Can you show me? I'm using what was in my game

Here they are: https://imgur.com/a/ENhgopv The one you wrote for Vanilla Ice is just BGM from Part 3 in the story mode. "My Killer Queen" is also story mode BGM.

Wait. Your copy keeps Anasui's name. What version do you have? Mine's is US

Oh sorry, I had checked on an emulator instead of my PS3. I was using a mod that seems to have changed some of the translations. I checked the original now and you were right for Fugo and Baoh so I changed those two back.

What about the others? I checked every DLC character theme on my game and these names were what displayed

I didn't remove any others aside from Vanilla Ice and Kira's because they were different BGM tracks for story mode.

I put what you added for Joseph, Esidisi and Iggy into the tracklist table above because those were more proper translations.

Weird how our music tracks are different. So you are sure these are the names?

We have the same music tracks aside from Vanilla and Kira lol. Maybe you mixed them up when checking. Here they are from my PS3 this time. (NA version) https://imgur.com/a/UzmkSpG

Well the weird thing for me is that i can't view the DLC stuff in my gallery for some reason. I looked for the names by selecting the characters in free battle and looking at the music track name at the corner of the stage select screen. Vanilla Ice was definitely Bad Luck with Friends and Yoshikage Kira with My Deadly Queen. I've still got no idea how to unlock the dlc gallery

I think the DLC tracks should be in the shop?

I just checked vs mode too and you're right. Looks like it's a mistake with the localization because the actual music that plays in the battles are Miasma of the Void and A Quiet Life for Yoshikage Kira instead of what the text on the stage select screen says.

Ah. My sincere apologies. I hope this clarifies some things. I also went to the gallery shop but they just don't appear anywhere. Like i only have the characters to play as, but not to view anything of them in the gallery. I've got the points to get them but just not got it available anywhere

Weird. Thanks for adding the localized names anyways (and also for asking me why I changed the names, otherwise I wouldn't have noticed that the Fugo and Baoh ones I added weren't official lol).

Your welcome. And sorry if i came off as a bit of an a**hole. I was just annoyed that what i thought was the right names were changed.

I was able to find the gallery stuff. I forgot to install the DLC

Yeah sorry it's me bannana,uh.......could you check on the jojo wiki for a quick sec it's kinda going to hell right now due to some users .anyways I'll see you in a year,bye.

Also it would be nice if you Could add a admin there so the wiki doesn't go to what it was beforehand,anyways I'll just wait out my ban.