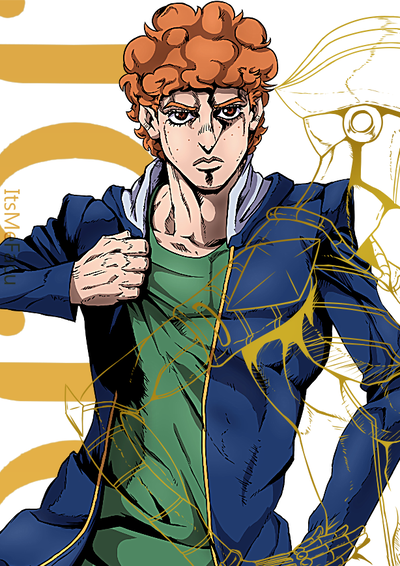 Colo (by his friends and family)

Colo Giorno (by his friends)

The information below derives from a source not written by Araki. As such, it may or may not be considered canon.
“
This is an epic moment for gamers. (これはゲーマーにとってエピック瞬間です。, Kore wa gēmā ni totte epikku shunkandesu.)
”
—Facu
SPOILER WARNING: Part 10 spoiler details may follow.

My name is Facu (ファク, Faku), but everyone calls me Colo.

I am a highschool student who lives in Argentina. I love drawing, and started making digital art on 2016. Since then, I upload my art to Instagram, YouTube and DeviantArt. I also enjoy video-games, like most people do.

I'm a 15-year-old of slim build and average height. My hair is ginger and afro-like.

I wear a dark blue hoodie-jacket with golden zipper over a green t-shirt, I wear the jacket everyday, unless the temperature is too high. The hood has a grey color on the inner part. I wear blue jeans and blue shoes.

The series is known for alternating colors between media, the information presented below may or may not be canon.
Skin(Fair)
Hair(Ginger)
Eyes(Brown)
Outfit
(Golden-trimmed blue hoodie over a green shirt, blue jeans and shoes)

My Stand is named Short Change Hero, a humanoid, short-ranged Power-type that, despite its low strength, it's capable of unleashing a rapid barrage of punches.

Its appearance is very similar to Giorno's Gold Experience due to their similar stats (both having C in Destructive Power and C in Speed).

Drawing: I'm experienced in digital art. I started drawing digitally in 2016, since then I try to practice and acquire as much knowledge as I can. I'd like to draw comics or design characters in the future, because drawing is one of the things that I enjoy the most.