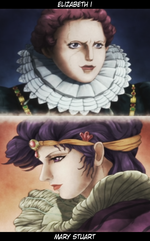 Manga Debut: Chapter 27, Tarkus and the Dark Knight Bruford, Part 2
Anime Debut: Episode 5, The Dark Knights
Voice Actor: Yuka Keichō (JPN, Elizabeth I), Karen Strassman (ENG, Elizabeth I)
Elizabeth I (エリザベス1世, Erizabesu Issei) and Mary Stuart (メアリー・ステュアート, Mearī Sutyuāto) were two queens of the Tudor dynasty who fought for the throne 315 years before Phantom Blood, in 1565. Mary was a beautiful 23-year-old woman with peace in her heart, her charm being enough to make men, no matter how strong, entrust themselves to her and seek comfort. With great tolerance, she took the lonely dark knights Tarkus and Bruford with a smile, enough for them to pledge loyalty and swear to make her queen, even if it cost their lives. When Mary's husband Darnley died from unknown causes, Elizabeth took the opportunity to charge her for his death, turning the population against Mary. She took Mary prisoner and ordered her to be beheaded, using an impersonator later to trick Tarkus and Bruford into giving up. Their executioner, who was killed by Bruford's hair, was the same one who killed Mary.
Darnley 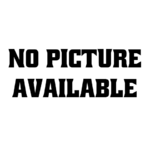 Manga Debut: Chapter 27, Tarkus and the Dark Knight Bruford, Part 2 (Mentioned only)
Anime Debut: Episode 5, The Dark Knights (Mentioned only)
Darnley (ダーンリー, Dānrī) was the husband of Mary Stuart. He died in an explosion caused by reasons unknown to history. His death was used as an excuse for Mary's execution, as Elizabeth blamed her for his death. Darnley is based on the real Lord Darnley.
Retrieved from "https://jojowiki.com/index.php?title=Template:Minor2&oldid=704972"
Category: