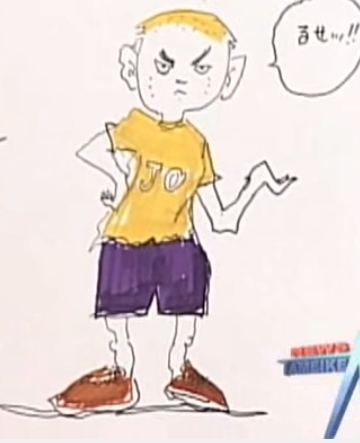 Jo Kujo (空条 ジョー, Kūjō Jo) is the hypothetical son of Jotaro Kujo and Shoko Nakagawa, created by Hirohiko Araki during an interview between Araki and Shoko in the Tameike Now webcast in 2007.

Jo is a young boy with very short light hair, large ears, and thick eyebrows. He has three vertical dots on both cheeks under his eyes. He wears a t-shirt that says "JO" in the center, along with shorts and sneakers.

The series is known for alternating colors between media, the information presented below may or may not be canon.
Skin(White)
Hair(Blond, black brows.)
Eyes(Gray)
Outfit
(Yellow "Jo" shirt, purple shorts, brown shoes with white soles.)

Jo's catchphrase is "Shut your mouth", which he always likes to say. He acts like he's Cupid and is prone to causing trouble by making random people get married with each other using his Stand. Him playing around eventually causes people to kill each other when they are forced into an unwanted marriage.[1]

Jo can write the names of anybody into his Stand named Love Note, forcing them to get married regardless of their feelings. They will not be able to get divorced either.