The Based JJL reader from Israel who updates the wiki every now and then.

Despite its reputation as a series with enough worldwide acclaim to be rereleased in multiple languages, one localization of JoJo's Bizarre Adventure stands out from the rest for the creative liberties it took: the Chinese translation, published in Taiwan and Hong Kong by Tong Li Publishing and in mainland China by Bilibili Comics. Some changes are to be expected in a localization, such as rewritten dialogue, but these publishers went a step further, even changing names entirely and redrawing art. Here are some of its changes and possible explanations and reasoning as to why.

One prominent change is that of the name of the Stone Ocean character and Stand, "Foo Fighters". The English localization keeps it recognizable by shortening the name to F.F., but in China, Foo Fighters's name is changed entirely to "Soul Hacker (斗魂骇客 Dòu hún hài kè)".

While there's no way of knowing for sure what the localization team's reasoning was, they could have been referencing Foo Fighters's ability to take over bodies and control them. On another note, the name implying that the character takes over a soul rather than a corpse may have been a decision made to better abide by Chinese censorship laws in regards to respect for the dead.

Another semi-official name for Foo Fighters in the Chinese release is "UFO Family (幽浮一族 Yōu fú yīzú)". The name originated in scanlations, but was recently validated through its use in the official Chinese translation of the mobile game Monster Strike. It may be a reference to the original meaning of the term "Foo Fighter" as slang for UFOs used by Allied pilots during World War II, with the "Family" referring to Foo Fighters's status as a sentient colony of plankton. 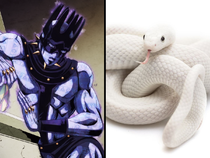 Among the many changed names in the Chinese release of Stone Ocean are two well-known characters: the supporting character, Emporio Alnino, and the main antagonist's Stand, Whitesnake.

Emporio's surname is changed to Armanio, most likely to make the original reference to fashion brand Emporio Armani more obvious. In the original Japanese release, Whitesnake was written to be pronounced like the English rock band of the same name using a writing system for foreign words called katakana: "ホワイトスネイク (Howaitosuneiku)". The Chinese release removes the foreign connotations by literally writing its name as "white snake" in Chinese, "白蛇 (Báishé)".

Other changed names include Guccio being changed to simply Gucci (古奇), Kenzou being rewritten in capital English letters as KENZO, and Lang Rangler's pronunciation changing to Lank Rankler (朗库·朗库拉).

The Chinese release makes an effort to tone down violence and gore in JoJo via redrawing and recoloring the original art. One such example of can be seen in JoJolion when the science journalist Taoka becomes the victim of the Stand ability Wonder of U. Taoka undergoes a fatal equivalent exchange after Locacaca fruit exposure that snaps his neck, killing him. The original Japanese release shows a clear view of the exposed neck bone, but heavy crosshatching in the Chinese edition censors it.

Also redrawn for censorship purposes is the view of a naked woman in a bathroom, seen when Josuke is investigating Yoshikage Kira's home. In Japan, the woman's nipples are shown, but in China, her nipples are erased and her breasts are redrawn to appear more like they're covered in a skintight piece of clothing rather than exposed. 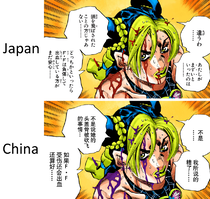 Jolyne's bloody encounter is changed into a shower of grape juice

One creative method was the usage of new text boxes to cover Jolyne's breasts and buttocks when she strips naked for a body check at Green Dolphin Street Prison. However, more conventional censorship methods were used to handle scenes with blood, with the Chinese release recoloring it into a distinctly purple color rather than the original version's dark red. The recoloring is only used after the first third of the part, but it can be seen during the Dragon's Dream fight. Jolyne's wounds from the prior Viviano Westwood fight are recolored in the Chinese version.

The Chinese release is one of the JoJo community's best examples of creative localization strategies used for a series infamous for its objectionable content and copyright hassles. What other changes could be lying unnoticed in JoJo's international versions?

Special thanks to fellow JJBE user Cinda for helping with wording and phrasing!