Marching Ants (マチングアンツ Machingu Antsu) is the ninth part of JoJo's Bizarre Adventure. It was announced in the author's note of the September 2021 issue of Ultra Jump on August 19, 2021.

Unlike the first eight parts, this part was not written by Hirohiko Araki, but instead by Gurin Joruno, award winning model, actor, director, writer, and artist.

The story is set in Anthillo in the year 2019 when a colony of ants is suddenly wiped out by a mysterious orange liquid that rains down upon their hill. The sole survivor, Joant Jobug, unlocks a special ability when enveloped in this orange liquid that she uses to find out the mystery of these new powers and her strange new circumstances.

Marching Ants represents the third part of the series set in the Steel Ball Run continuity.

Joant Jobug describes her average day in the life of an ant living in Anthillo, when suddenly a strange "flow" comes in through the entrances of the anthill, wiping out Joant's colony, but in turn gifting her with a new ability she calls "Ants on a Log."

The rough idea is that Joant goes from anthill to anthill trying to uncover the mystery of the orange liquid, fighting other Stand Users, and taking down Queen Antastasia, who plans on using the orange liquid to control all of ant-kind. It's revealed at some point that the orange liquid is juice made from the lemon/tangerine hybrid created in the Wall Eyes from JoJolion, which either kills ants or gives them Stands. Perhaps there are also other things that this mysterious liquid can accomplish... 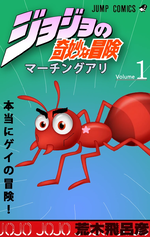