The Janken Battle tickets were available on the "Janken Boy is Coming!" event related cards.

Batting Battle was a mini-game in which the players were tasked to beat Telence T. D'Arby and Jotaro Kujo in swinging sets of Oh! That's a Baseball! 3 times. At certain intervals the opponent forced the players to swing at a baseball. The mini-game was timing based, having the players tap the screen once the thrown ball comes into the reticle, turning it from red to orange. The ball was thrown in various way, mimicking the manga and anime. Tapping at the right moment hit the ball and scored a Home Run. If the player scored a Home Run 1/3rd of the opponents health depleted, however failing a swing had no consequences and gave the player some skill charge. The game could be only lost by letting the time run out. Once the player has filled up and used the mini-game gauge, the mini-game played and the throw was always an easy to telegraph straight.
When the player scored a Home Run the next ball was thrown immediately, stopping after a failure or winning the battle. 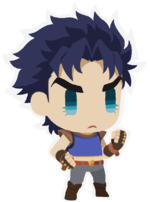 Cost: 0
For every 35 Jonathan panels cleared, four random panels will be erased. 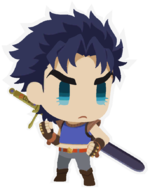 Skill: The Sword of Luck and Pluck

Cost: 0
After making a 5x5 or bigger, enhances 4 Jonathan panels. 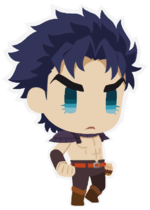