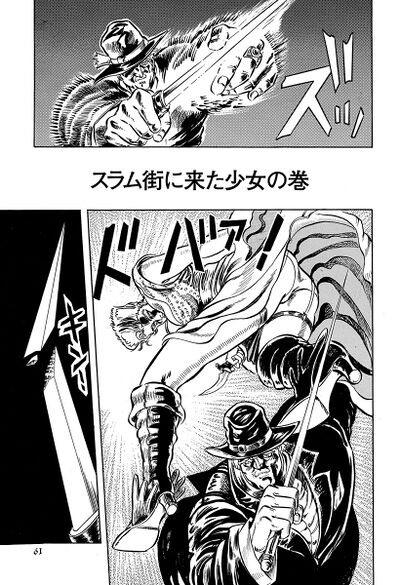 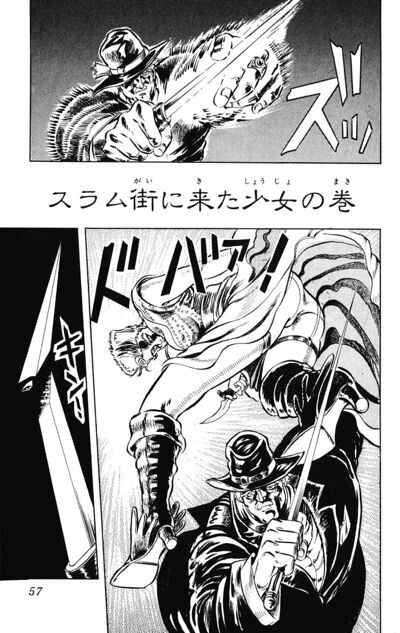 The Girl in the Slums (スラム街に来た少女, Suramu Gai ni Kita Shōjo, lit. "The Girl Who Came to the Slums") is the second and final chapter of Gorgeous Irene.

An unknown female assassin attacks Irene's butler, who barely notices the tattoo on her back moving before his neck is slit. As he dies, the butler tells a squirrel to tell Irene about his death and the assassin coming for her. A police bulletin alert is put out for the prime suspect, Irene, ordering that she be captured alive and warning of her danger and hypnotic powers.

A flashback reveals that Irene's father was born in the underworld and became a hardened killer due to his circumstances. He was absolutely loyal to his boss, but eventually both him and his boss were killed by another organization. Irene, the killer's only child, inherited his killer instincts and deadly skills.

Meanwhile, a young man named Michael relaxes in the slums of Harlem in New York City. Michael sees Irene walking by and is shocked to see that she is walking alone. The butler's squirrel finds Irene and tells her the news, but Michael knocks Irene down and grabs her purse, hoping to make off with her money. However, Michael only finds makeup in the purse and notices the lack of fear on Irene's face. Suspicious of the woman's strange aura, Michael takes out a knife. Before Michael can make a move, Irene grabs the knife with two fingers and hugs Michael, further confusing him. Some thugs appear and ask Michael to share Irene with them, but Michael is strangely compelled to beat them up before escaping with Irene.

Michael and Irene go to a bar, where a drug dealer offers to make Irene rich as a "movie star." Irene agrees immediately, but Michael elbows the man in the face and warns Irene not to trust everyone she meets. Michael takes Irene to a subway station, where he gives Irene money for a train. Irene almost gives the money to a homeless man before ultimately buying an old racing stub from a nearby man. Michael refuses to take care of the foolish girl once more, but Irene reveals that her father and butler are both dead. Upon hearing that Irene has no home, Michael has no choice but to take her to his own house. The next day, Michael and Irene rob a store for money to support Michael's hopes of becoming a musician. The man who attempted to hire Irene meets with the assassin who killed Irene's butler, who shows him a picture of her target. The man says he saw her recently, although she looked different than in the picture.

That night, the female assassin breaks through Michael's window, having located her target. Intending to kill Irene before she can switch personalities, the assassin pins her in place, uses her own Phantom Tattoo ability to grow an arm from her back, and stabs Irene in the shoulder. However, one of the assassin's feet is blown off by one of the mines Irene had planted in the floor of Michael's home earlier, as she had expected assassins to target her. Unfazed, the assassin uses her Vicious Species Tattoo ability to summon man-eating fire ants from her tattoo; the assassin herself reveals that a special repellent she wears makes her immune to their ferocity. The fire ants latch onto Irene's face, but she applies her Battle Makeup and forces the insects out of her skin with the muscles in her face. Irene uses her Execution Makeup lipstick once more to draw on her opponent's lips, preventing the assassin from closing her mouth. As the woman realizes that she hasn't applied the repellent inside her own mouth, the fire ants begin crawling into her mouth, causing her to fall backward out of the window. Irene apologizes to Michael for lying to him, and leaves him with a parting kiss.

Michael later discovers that the old racing stub Irene bought is worth a fortune and moves to Los Angeles with the winnings to start his music career. He eventually releases a debut single about a mysterious girl, which sells over 600,000 copies. Irene was never seen again after the battle with the assassin. It is reported, however, that a mafia boss named Tony Bormont had committed suicide in his Chicago estate by stabbing himself in the throat on the seventh day of the month. Bormont had previously given the order to have many of his rival gangs across the U.S. assassinated; due to the mysterious circumstances surrounding his suicide, the police's investigation into the incident is ongoing.

Author's Note
“
Being published in SJ is an honor! Thanks to Mr. Nagazawa and Mr. Ogawa for their help. I'm starting a new series in the first issue of the New Year!
”
—Hirohiko Araki
“
SJに掲載できて光栄!長沢さん小川君手伝いアリガト!新年1号から新連載やるよ
”
—Hirohiko Araki