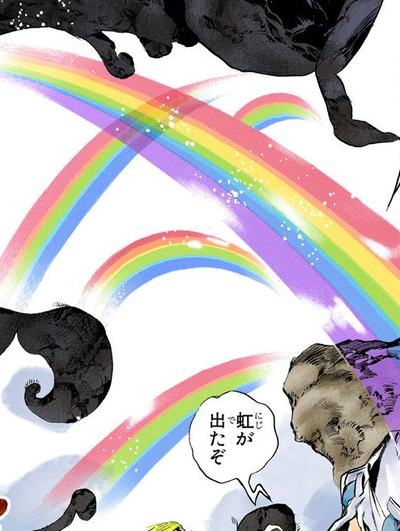 Heavy Weather alters the refraction angle of the sun's rays entering earth's atmosphere with Weather Report's ability to control the weather. As a result, rainbows manifest in the surrounding vicinity.[2] Those who touch the rainbows will perceive themselves as being a snail due to a natural subliminal effect created by the altered refraction angle.[3][4][5] All animals are affected by the metamorphosis aside from Weather Report who is immune to the effect. Pucci theorizes that perhaps there is an image of snails being reflected within the sun's rays or the sun reminds organisms of their prehistoric instincts. The deep subliminal effect of the ability physically affects their bodies as well.[3]

The transformation can be either a progressive change into a giant snail hybrid, a breakdown into numerous snails,[1] or an explosion into a cluster of snail eggs that hatch immediately.[2] One can also begin to turn into a snail by physically touching one of the snails created, or an individual already turning into a snail.[4][6]

A partial transformation alone comes with a number of handicaps such as getting stuck on surfaces, sluggish reactions and speed, and loss of strength because of the softening of the body. Moreover, the victims also become vulnerable to snail-eating predators[7] and contact with salt, which dehydrates the body.[8]

Snails created through Heavy Weather can procreate freely thanks to their ability to change gender. The procreation is very fast and accelerates exponentially, causing a rapid multiplication of the snails. Any person trapped inside a swarmed area is practically doomed to be touched at least once and begin their metamorphosis. If left unchecked, the swarm of snails will endanger whole cities.[6]

As discovered by Enrico Pucci, a blind person is immune to the effect of the Stand, since they can't see the subliminal messages carried through the sun rays.[3] This allowed Pucci to protect himself by having Whitesnake extract his sight. Regardless, once a person starts transforming into a snail, unless Weather himself is killed, the process is irreversible.