B.T. is fairly intelligent, more than the average kid, and uses his talent to come up with clever schemes. For instance, he manipulates the frictions between two of his bullies to have one stabbing the other in anger, and comes up with a plan to fake a death and blackmail an upperclassman he dislikes. He's knowledgeable in a good numbers of topics and has great deductive skill. He once observed a car from afar and by analyzing the plate, guessed which direction it would take.

B.T. is quite skilled in a number of tricks, from magic tricks to other athtletic feats. His skill in a good number of tricks help him perform the unexpected against stronger enemies and help him come up with clever plans that ordinary people won't see coming. }} 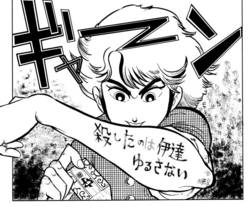 B.T. is able to make it appear as if blood-red letters are forming in his skin. Really this is done by using a sharp object such as a toothpic and etching the writing and markings beforehand, revealing them later by rubbing another surface against it, such as a cloth or charm. B.T. uses this trick to make it appear as if a divine spririt is communicating through him.
Disappearing Trick(皮痛文字トリシク Kawa-tsū moji torishiku)

Through a quick series of actions, B.T. can make it appear as if he himself or other objects vanish into thin air. While this is first used a a joke against Koichi, it becomese crucial against the The Leader and The Major as BT uses it to frighten and maneuver around them. By making his target focus on another object or thing surrounding him, then forcing them to close their eyes for a brief second, in that short span of time B.T. moves out of sight from his target. When their target re-opens their eyes B.T. will no longer be there, seemingly making it seems as if he disappeared entirely. 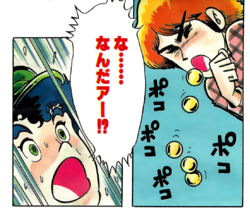 Originally used during his first encounter with Koichi, B.T. puts a singular ping pong in his mouth and hides several others up his sleeve. He then pretends to break down
Retrieved from "https://jojowiki.com/index.php?title=User:MistaHolmes/Test_2&oldid=662793"