Neck bone broken by Wonder of U

JJL Chapter 97
“
I'm going to pursue you to the ends of the earth and it'll be the end of this hospital!
”
—Taoka to Satoru Akefu, JJL Chapter 97: The Wonder of You (The Miracle of Your Love), Part 14

Taoka is a young adult Japanese man with an average build. He has short, slightly dark hair tied up into two ponytails. One of his most prominent features are swollen pimples on his nose and cheeks. He wears a light-colored coat, a pair of glasses and light colored shoes.

The series is known for alternating colors between media, the information presented below may or may not be canon.
Skin(Fair)
Hair(Brown)
Outfit
(Light green-yellow suit, orange suit collar and yellow glasses)

Taoka is an ordinary journalist with not much notable traits. He is analytical, as when he receives a package containing evidence against the Head Doctor's research, he quickly understands the situation behind the development of the Locacaca. When he meets the Head Doctor for an interview, he introduces himself politely. As the interview goes on, he slowly turns confrontational towards the Head Doctor and threatens to expose him for his unethical research.[1] 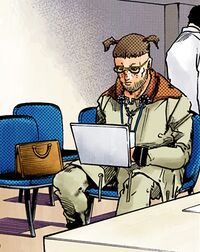 Taoka waiting for his interview

Taoka makes his first appearance at the TG University hospital lecture hall awaiting to hold an interview with the Head Doctor Satoru Akefu. While typing on his laptop, he receives a package from Josuke Higashikata. He opens it with the upmost caution, finding an SD card containing a video of Holy Joestar-Kira along with a jar containing the Locacaca fruit. With this evidence, Taoka realizes the sinister history of Akefu's research.

He makes his way to the waiting room to hold his interview with the Head Doctor, intending to confront and expose him for his unethical medical research. He introduces himself and praises Akefu's work but without any acknowledgement from the doctor, who's ominously facing a wall. When he turns around suddenly, Taoka stammers for a moment and reintroduces himself. Taoka begins his interview. He picks up the package and opens it, detailing the contents and questions Akefu about the Locacaca fruits' use. He continues and threatens the Head Doctor for using Holy Joestar-Kira as a test subject for the fruit. Akefu is uneased at this confrontation but simply asks Taoka about his intention to 'pursue'. 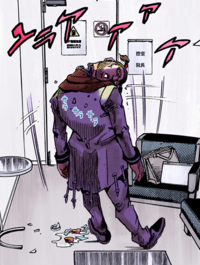 Taoka states his intention to pursue and threatens to expose Akefu's research along with the hospital. With the trigger for his ability activated, Akefu begins to doubt Taoka's conclusion about the jar even containing a fruit. He explains how it's not possible to certainly know without opening it, and predicts that Taoka consumed the fruit in some fashion. Taoka stands bewildered throughout this monologue and asks what the Head Doctor is trying to say. Akefu walks out the room, stating that he answered his question and suggests Taoka take a look at his own neck. Taoka, still confused, demands that the Head Doctor comes back but notices that his pimples are gone. Under influence of the calamity, the Locacaca slowly took effect to treat his pimples. As a result of the equivalent exchange, his neck is turned to rock and breaks open, killing the reporter immediately.[2]

Afterwards, Akefu turns his attention towards the package's sender, Josuke Higashikata, and begins to pursue him.[3]