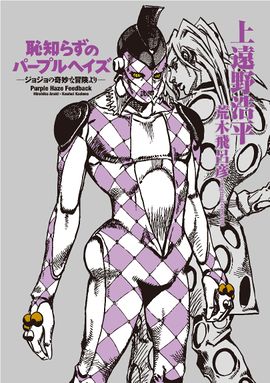 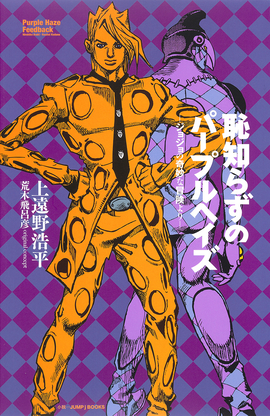 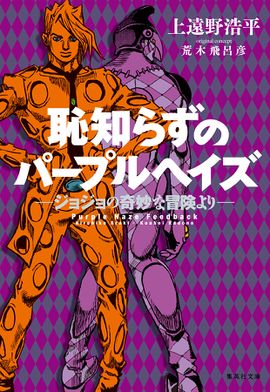 with illustrations by Hirohiko Araki. It was released as part of the special JoJo 25th Anniversary project "VS JOJO."

The light novel tells an original story featuring the character Pannacotta Fugo, from the fifth arc of JoJo's Bizarre Adventure, Vento Aureo. Set six months after Passione's insurrection, Fugo is sent on a mission to eliminate the rogue Sezione Droghe as a means of redemption.

The story begins in the Stadio Giuseppe Meazza

in Milan, six months after the events of Vento Aureo, in which Pannacotta Fugo meets Guido Mista. Mista orders Fugo to assassinate Massimo Volpe and the rest of Passione's narcotic team to prove his loyalty. He also assigns Sheila E to accompany Fugo to help him.

Meanwhile, the narcotic team meets in the Villa San Giovanni

with Sale, who is provoked into attacking by Vittorio Cataldi and killed by Vittorio's Dolly Dagger.

Fugo and Sheila meet Cannolo Murolo in a hotel and exchange information on the narcotic team; Passione had apparently used Volpe's Manic Depression to synthesize high-quality drugs for free, leading to Passione's quick ascension in the drug business. Fugo reveals that Volpe was once his classmate, albeit they weren't familiar with each other. Sheila also reveals that she joined Passione to kill Illuso, an assassin responsible for killing Sheila's sister; and felt grateful to Giorno Giovanna for avenging her. Murolo's stand All Along Watchtower divines the location of the narcotic team in Taormina, Sicily. They decide to investigate the island.

In Sicily, Fugo wonders why Giorno specifically handpicked him to assassinate Volpe. Sheila is lured away from her team by Mario Zucchero, who, after a brief fight, is revealed to be a bait. Meanwhile, Vladimir Kocaqi goes on to meet Fugo and Murolo in the Teatro Greco and both are trapped by his stand, Rainy Day Dream Away. Sheila finally meets Kocaqi, who reveals his tragic past during World War II and defeats her as well. Fugo then throws himself into the sky and exploits Kocaqi's stand to hit him fatally with Purple Haze.

After learning of Kocaqi's death, the Sezione Droghe decides to go retrieve a Stone Mask in an old Nazi bunker to power Volpe up. Meanwhile, Fugo, Sheila, and Murolo track them up to Ortygia, Syracuse. On the way, their helicopter is attacked by Angelica Attanasio's Nightbird Flying, which incapacitates the pilot, Murolo, Sheila, and Fugo, sending their helicopter into the sea. Fugo wakes Sheila up accidentally, who saves them both, leaving Murolo's fate unknown. They decide to steal a car. The local population then controlled by Angelica goes on to attack Fugo and Sheila but they escape with the car. Fugo is then thrown out of the car by Voodoo Child as Sheila wanted the team to split up.

While a weakened Angelica goes to look for Fugo, Sheila finally meets Volpe on the road; she tries to run over him, but Volpe, using his stand Manic Depression to power himself to the human limits, destroys the car instead. Meanwhile, in the Syracuse cathedral, Vittorio retrieves the Stone Mask, but it is stolen by Murolo. Murolo destroys the Mask and reveals the true nature of his All Along the Watchtower, killing Vittorio. Murolo also reveals that destroying the Mask was a secret part of the mission, an agreement between Passione and the Speedwagon Foundation to stop that menace.

At the same time, Volpe remembers his own past during his fight with Sheila, revealing an apathy for the world around him and that he is, in fact, Tonio Trussardi's brother. Assailed by a mob, Fugo almost succumbs to them when Angelica expires, freeing Fugo again. Sheila, having been defeated, is held hostage at the Temple of Apollo.

Up until now, the storyline is often marked by Fugo's flashbacks, revealing his past. Fugo was an intelligent child who didn't get along with either his wealthy family who pushed him to academic excellence, nor his peers who looked down on him because of his lineage. The only person he loved was his grandmother, but unable to attend to her funeral because of his studies, he bashed a teacher in the head with a dictionary who taunted him about his grandmother and was thrown out of the university for it. Meeting Bruno Bucciarati in prison, they sympathized and Fugo joined Passione. Fugo bonded with his team, especially Narancia whom he introduced to Bucciarati. At the same time Fugo had been carrying out multiple assassinations, missions he kept secret from Bruno, knowing he wouldn't condone such actions. Fugo found himself conflicted between the moral wrongness of his world and his incapacity in changing it. Fugo then reminisces his time during his mission with Trish Una, during which he noticed Giorno Giovanna's potential. He finally remembers how every member of his team went on to do the right thing, accompanying Bruno in his revolt against Diavolo while he alone remained behind, a decision he didn't understand.

Fugo finally confronts Volpe, and having finally found a common point with Sheila, understands the empathy his old companions felt for each other. His newfound resolution upgrades Purple Haze in time before Volpe can make a fatal blow, Fugo, having kept a virus capsule in his mouth, breaks it and sprays the virus into Volpe's face, who dies horribly. Fugo then breaks another capsule to counter the previous virus and manages to survive. Hospitalized, Fugo nevertheless notices that his Stand isn't the same as before.

A week later, Fugo meets Giorno in a restaurant and, after a brief chat, Giorno tells Fugo that he always thought differently from his peers, and this difference unconsciously infuriated Fugo, leading to his short temper and that the assassination's true purpose was to make Fugo overcome his own demons. Given a photo of his old team, Fugo finally swears loyalty to Giorno.

After the events of Vento Aureo, Trish Una visits the tombstone of Bruno Bucciarati to say a few words to him. Incidentally, Bucciarati's mother also arrives there and asks Trish how Bucciarati died, triggering the memory of the group discovering Bucciarati's corpse in the Colosseum. Giorno then admitted that he knew that Bucciarati was dead all along and that they worked together to topple Diavolo. Angered at the betrayal, Mista almost shot Giorno but Giorno persuaded him to let him live as a member of Team Bucciarati. In the present, Trish and Bucciarati's mother then discuss their respective memories of Bucciarati and his righteousness. The two ultimately weep over Bucciarati's tombstone.