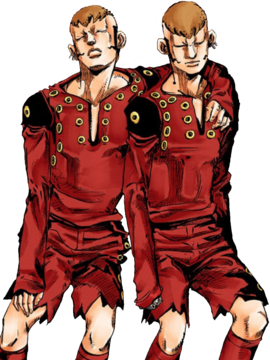 Aside from that, the elder of the two brothers seems to be the one in charge, and was the only one to speak at first, but the younger brother speaks as well later on. The elder brother is the one who communicates with the policemen in place of his brother and the one who displays a Stand power;[1] his brother however would later reveal he also possessed a Stand - hidden in his soccer ball bag. The younger brother is more reserved, preferring to let his older brother do most of the talking. The younger brother also has a habit of kicking around his Stand's container and performing tricks with it, not unlike, and in the guise of, a soccer player.