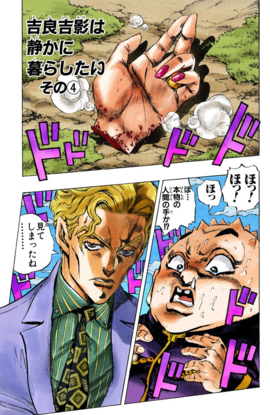 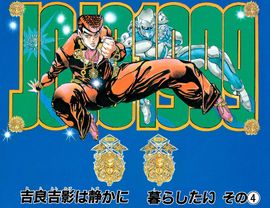 Kira's severed hand he uses as a "girlfriend" has been discovered by Shigechi, to the former's irritation. Before Shigechi can recover from the shock of seeing the hand, Kira remarks that they are alone and tries to pick up his hand. However, Shigechi stops him and surrounds him with Harvest. Unfazed, Kira presents himself formally as well as his way of life. His goal is to have as much of a peaceful life as possible, and Shigechi by discovering his weirdest habits, represents an obstacle he has to erase. Kira summons his Stand: Killer Queen. Shigechi sends Harvest after Killer Queen which manages to destroy several of the Stand but is surrounded as well. Shigechi then brags about Harvest's prowess but Kira remains calm, learning everything Shigechi is revealing about Stand powers. The middle school student notices that Killer Queen is holding something suspicious and has one Harvest take that from him, he sees that it is an ordinary 100 yen coin, but Kira reveals that Killer Queen has the power to transform everything into a bomb. Shigechi reacts too late and the Harvest holding the coin bomb is disintegrated while the blast reaches Shigechi, heavily damages the greater part of his face, and sends him flying away. Picking up the hand, Kira ominously declares that he will sleep well this night.