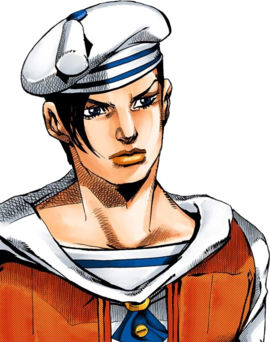 Yoshikage is the son of Holy Joestar-Kira and the older brother of Kei Nijimura. Yoshikage works as a marine surgeon and is also a Stand User, wielding the bomb-producing Killer Queen. Parts of his body are exchanged with Josefumi Kujo, transforming Josefumi into Josuke Higashikata.

Kira is a man of slim to medium build and seemingly average height. He is handsome, with dark eyes and fine features, and wavy black hair of irregular chin length resembling thin naturally occurring dreads (later appearances depict the same lock of hair as straightened). According to Ojiro Sasame, he has beautiful hands and somehow bore a resemblance to Josuke despite him stating their obvious differences in appearance. He wears a sailor uniform much like Josuke's, though with a tasseled beret or bonnet, in contrast to Josuke's "Dixie cup" style sailor's cap.

His corpse is discovered without testicles, in contrast with Josuke's four, without a related wound.[5]

Kira is a narcissist, keeping sculptures of his own hands around his house, apparently as documents to their ideal state.[6] A copy of the Mona Lisa hangs from a wall in his living room,[7] alluding to the Kira from Diamond is Unbreakable's attirance for beautiful hands although this version of Kira doesn't show the same fetish. He seems to have certain obsessive-compulsive tendencies, keeping an organized stock of entirely green foods,[8] and shelves of containers of his fingernails in his bathroom, labeled by date.[9]

His interactions with others are mostly cold and apathetic, fitting and contrasting his occupation as a surgeon. As a teenager, he immediately jumped to the conclusion that a drowned and unconscious Josefumi was fated to die, showing exasperation when his mother prompted him to manually save the boy's life, only wishing to see Titanic in theater later and leaving the hospital alone because of it.[10] As an adult, when a fellow crew member on his team is injured, sustaining heavy blood loss and the inability to breathe, as the surgeon of the crew, Kira applied little effort to helping him, nonchalantly putting his shoes on before getting out of bed and ordering the others to hold his hand and encourage him, without so much as looking in his direction (his lack of concern was mostly due to presumably knowing the seriousness of the injury and that the crew member was in no life-threatening danger).[11]

He is shown in several instances speaking to Ojiro Sasame in a deliberately confusing and insulting manner, intimidating and threatening him away from the coast in order to rectify Kira's personal problem with him as a surfer; being 'indecisive' about being either a man of the sea or of the land. Apparently, it went to the point that Ojiro ate his own fingers.[12] Another midler instance of Kira brutalizing Ojiro happened when he inserted a small bomb in Ojiro's cheek to chase him away.[13]

However, his sister Kei claims that he was not heartless, as he cared for his mother and actively worked to save her from the same disease that plagues the Higashikata family.[14] On another occasion, Kira sacrificed his life to save Josefumi when their plan to cultivate and harvest the Locacaca fruit was found out by Yotsuyu and Damo, as he believed Josefumi had no right to die since he was only involved because of Kira's own personal agenda. This proves he can be a good loyal friend to those he cares for.[15][16] His thoughtfulness was also shown the first time he met Yasuho Hirose, as he made sure to kill the Hair Clip that tormented Yasuho while apologizing to her and promising to reimburse the cost.[17]

Kira also shows remarkable spirit in the face of adversity. When Tamaki Damo captured him and Josefumi, Kira showed unwavering defiance, even swearing that he would kill all of them and seize the Locacaca, and at the same time thought up and completed a plan that would help him and Josefumi escape from the Rock Humans[18]

Kira is one of the few characters who express the belief that there is a kind of fated connection between Stand Users.[19]

Kira's Stand is Killer Queen, with the ability to generate bubbles that explode on contact. Part of this Stand is fused to Josefumi Kujo's when the two are buried together, resulting in Soft & Wet.[20] The Stand also has an ability called Sheer Heart Attack, which releases several miniature remote controlled bomb tanks.

As a doctor, Kira demonstrates an extensive level of medical knowledge and is capable of diagnosing and treating injuries on the spot. While on a cargo ship, he displayed confidence in being able to perform on-site surgery on a man who had lost his eye.[21] Kira's calm personality and Stand ability also assist him in his profession as they allow for an advanced level of precision during medical procedures, such as being to remove a blood clot using Sheer Heart Attack.[22] In relation to being a ship surgeon, Kira is also knowledgeable in sailing boats as seen in the Vitamin C and Killer Queen story arc. 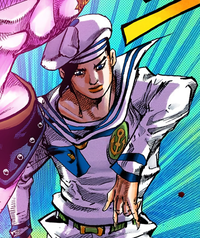 In the fall of 2005,[23] Kira encountered a 13-year old Yasuho Hirose after she had been admitted to the hospital for non-fatal head injuries. Following a brief exchange between her and Holy, Kira entered Yasuho's room and apologized for his mother's behavior, while also revealing that he had stepped on Yasuho's hair clip earlier. He stated that the crystal inside was a fake, but offered to pay for it before walking out.

At some point Kira associates with Karera Sakunami, and the two take a photo together with Josefumi. She remarks that Josefumi and Kira used to live together. 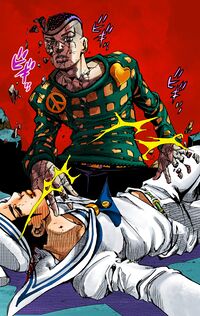 Kira's corpse is later found at this site, his cause of death diagnosed as cardiac arrest.[24] Josuke and Yasuho subsequently attempt to investigate Kira, particularly due to his connections to the Higashikata family.