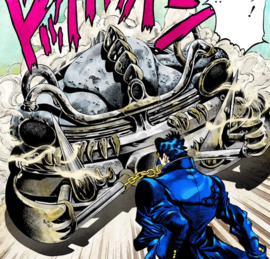 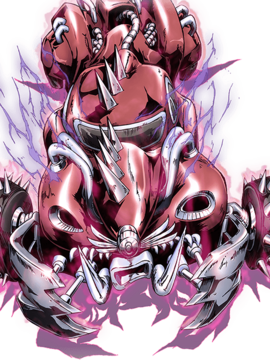 Destructive Power
B
Speed
D
Range
D
Persistence
A
Precision
E
Developmental Potential
D
A
B
C
D
E
A: Very Good
B: Good
C: Average
D: Poor
E: Very Poor
“
This car, is there anything it can't do?!
”
—Polnareff about Wheel of Fortune, Chapter 153

Wheel of Fortune (ホウィール・オブ・フォーチュン（運命の車輪）, Howīru Obu Fōchun) is the Stand of ZZ, featured in the third part of the JoJo's Bizarre Adventure series, Stardust Crusaders. As a Stand bound to a car, it is capable of morphing its exterior to suit the needs of its driver.

Wheel of Fortune is bound to a car and, like Strength, is also visible to non-Stand users. Its appearance can change wildly because ZZ can change the features of the car to suit his purposes.

When engaged in combat, the vehicle linked to Wheel of Fortune transforms into a monstrous version of itself; spikes and tubes erupt from its hull, its bumper morphs into a beastly maw, with mandible-like projections on either side, and it gains massive exhaust ports on its rear.[1]

The colored manga depicts Wheel of Fortune as being mostly grey, while the anime depicts it as being red with bright, metallic parts.

It represents the Tarot Card Wheel of Fortune

, which symbolizes change and unpredictability.

The car can morph and adapt to any situation

Wheel of Fortune is a powerful and versatile Stand thanks to its transformation ability, giving it complete control over the car it uses as a catalyst.

The Stand's primary ability dramatically enhances a vehicle's appearance and capabilities, "allowing even a common dilapidated car to transform into a more powerful car with (nigh-permanent) four-wheel drive."[2] The car is also able to repair itself, distort its hull to squeeze inside a crevice, orientate its wheels horizontally to drive between walls, create spikes on the wheels to scale a cliff, and even separate its internal wiring to create dangerous sparks.[3]

The shapeshifting is linked to ZZ's confidence: the more aggressive he is, the more powerful and monstrous the car will be. Conversely, when he begs for his life, the car reverts to its true state.[3]

Wheel of Fortune can shoot its own gasoline at its opponents as a high pressure scatter shot. The gasoline is fired with enough force to damage a human body, but its primary purpose is to make its targets highly flammable, allowing ZZ to set them ablaze with sparks from his car's cables.[3]

ZZ can hijack nearby cars' radios in order to converse with people.[1]