These are nameless minor characters from other works by Hirohiko Araki, or from JoJo media that does not belong to Araki's work. 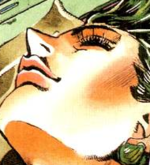 Manga Debut: Dolce and His Master
A young beautiful woman whom Masago Ayashi agreed to bring to his yacht on a boating trip. She is only seen in her swimsuit. She dies when the yacht crashes onto a rock. Masago mentions once that he purposely drowned the woman to eat her corpse later.

Dolce stands on her corpse in the beginning of the manga, but is disturbed by the flies buzzing around her. Masago claims to himself that it wasn't his fault that the woman drowned, and blames her for making Masago crash his yacht by taking off her clothes and distracting him. He uses her purse to make an outfit for Dolce. Later, a cannibalistic Masago plans to eat her corpse, but realizes there are sharks lurking nearby when he sees only her foot on deck.

Manga Debut: Gorgeous Irene
A female assassin who tried to kill Irene Rapona. She tries to attack Irene with a swarm of red ants, protecting herself with bug repellent, but Irene's makeup also repelled the insects, making the assassin's attack ineffective. Irene then hypnotizes the assassin into opening her mouth, letting the deadly insects into her throat, killing her.
Retrieved from "https://jojowiki.com/index.php?title=Unnamed_Characters/Other&oldid=429162"
Categories: