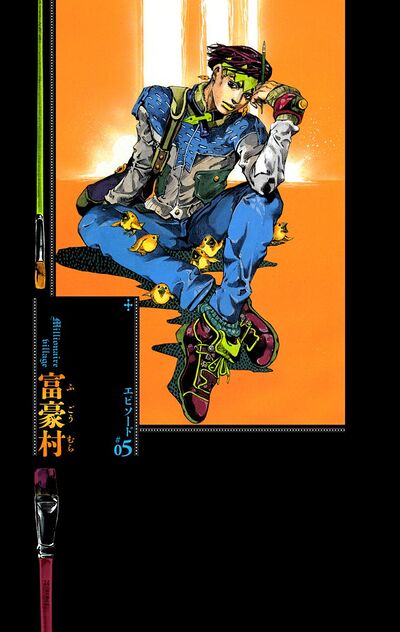 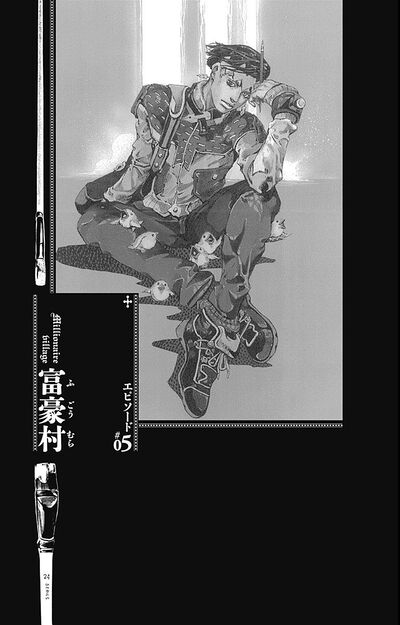 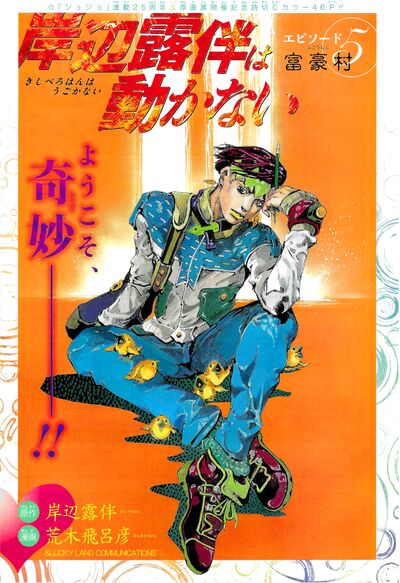 The one-shot is a JoJo's Bizarre Adventure spin-off starring Rohan Kishibe, a key character of Diamond is Unbreakable, as the main protagonist.

An OVA adaptation of the one-shot was announced on April 15, 2016 and was produced by David Production. The promotional DVD was made exclusive to applicants who had purchased the entirety of the Diamond is Unbreakable Blu-Ray or DVD set before the deadline of July 31, 2017. Another adaptation of the one-shot was produced as a TV Drama and broadcasted on December 28, 2020.

The first two pages of the one-shot feature Rohan performing his morning hand exercises for his drawing session.

Rohan and a Shueisha magazine editor by the name of Kyoka Izumi are meeting at cafe in Morioh. They discuss the one-shot Rohan must complete by the end of the summer, Izumi suggests that Rohan talks about buying a villa in the mountains. She shows Rohan a satellite photography of an isolated yet incredibly luxurious village in the middle of the mountains. Having done research about the owners, the editor claims that whoever buys a property in the village becomes incredibly rich. She asks Rohan to come with her when she buys a villa, to use as a prompt for his one-shot.

Hiking up the mountains, Izumi mentions that the people in the village are intolerant when it comes to etiquette, and will not sell to anyone without manners. Thus, she warns Rohan to watch his manners, to his irritation. Finding a lost chick, Izumi places it in a candy box and decides to find the nest later. At the front door, a child butler named Ikkyu greets the two and leads them into a room to wait for the current owners, giving them tea as refreshment. Although they guess that they are being tested, the butler soon asks Izumi to leave as she's already breached three obscure rules of etiquette among which is stepping on a tatami's edges.

While Izumi begs for a second chance, which is granted, Rohan reaches into his pocket and realizes that the candy box sheltering the chick is overflowing with blood and vermin. Moreover Izumi's is devastated to learn on her mobile phone that her mother and fiancee both died in a car crash. Rohan immediately uses Heaven's Door on Ikkyu and realizes with horror that he is tested by the gods of the mountains, who punish breach of etiquette with the death of the transgressor's loved ones. His reckless action causes Izumi to have a heart attack. To save his editor, Rohan must face another trial. Finding himself sitting with a plate of corn, Rohan correctly deduces that the proper and only way to eat corn is to hold it with both hands. Moreover, Rohan has written on Ikkyu that he'd be unable to see the tatami's edges, causing him to breach etiquette three times. Izumi returns to life, and as a prize, he asks for Izumi's loved ones to be returned to her as well.

Upset, Ikkyu threatens Rohan who is confident of his safety since the one breaching etiquette was still Ikkyu. He immediately leaves without any intent to return, carrying the still unconscious but safe Izumi. Outside of the village, he gladly notices that the chick is also alive and healthy.

Gods of the Mountain
Stands

“
The greatest benefit I obtained from "Millionaire Village" is Kyoka Izumi, the editor character. Even though she has an annoying personality, I love this character and I would consider her a masterpiece. I want to certify on my honor that no editor among my entourage was used as a model. It's true, and I'm not just saying that because I fear reprisal.
”
—Hirohiko Araki
“
この『富豪村』の大きな収穫は、登場する女性編集者＝泉京香のキャラクター。この女性に対し、ムカつきながら描きました。でもキャラとしては大好きで傑作の出来と自負します。
名誉のために言っておきますか、モデルはぼくのまわりの編集部にはどこにも存在いたしません。本当です。怖くて言い訳しているのではありません。
”
—Hirohiko Araki

The idea of this one-shot came to Araki when he overheard a conversation between some homeowners and an association of hunters. The owners took issue with wild boars entering their property in the mountains and were asking the hunters to exterminate them. Araki privately disapproved of this and kept notes about the conversation. Later, when he was asked to write a one-shot, Araki combined the ostentation he felt from the owners' world and the opposite idea -respect for nature and the mountain- into the broader idea of manners. Thus Araki developed his idea of a battle of manners. The one-shot itself follows the classical structure of ki-sho-ten-ketsu.

For the setting, Araki aimed for present-day Japan but with otherworldy elements. He compares his setting to Seishi Yokomizo's novel, the Inugami Clan and Yatsuhaka-mura.

For the cover of the one-shot, Araki used a backdrop of a waterfall reminiscent of the painter Hiroshi Senju's works and drew chicks gathering around Rohan, to reflect the theme of respect for nature.

The one-shot originally started with Rohan directly meeting Kyoka Izumi but Araki later inserted several pages to present Rohan and give the readers the impression that something bizarre could be happening. Araki introduced Rohan from behind, as a mysterious figure, before he explicited his job as an eccentric mangaka.

Araki focuses on a singular panel, the aerial shot of the Millionaire Village. He isolated the village by omitting any road and contrasted this with the number and designs of the buildings to show that it was a place for the superrich. Moreover, the aerial viewpoint, meant to evoke that of a spy satellite, elicits a suspenseful mood. Finally, showing the village itself from afar presents the reader with an objective -visiting said village- so that the story is always positive and the characters work toward a goal.

Kyoka then explains that each of the owner there were poor but that they purchased a property in the village at the same age, only to become rich. This wierd anecdote is meant to lure the readers further but Rohan's curious reaction is also shown, expliciting that his primary motive is curiosity.

Further in the one-shot, Araki introduces the character of Ikkyu, whom Araki intends to be the antagonist of the story. Ikkyu's character design (snobbish attire and braided hair) is typical of a shonen manga villain (in Araki's point of view). Moreover, the child's eerie appearance and impeccable manner mark him as a sinister character and signal what will be the subject of the struggle. Ikkyu's introductory panel is also drawn from the POV of Rohan, with the butler opening the door and a glimpse of the manor being revealed to suggest that the heroes will be going further.

To depict the battle of manners, Araki made extensive research about Japanese etiquette and had his story reviewed by an expert.

As the story builds toward the climax, Araki's art becomes more dramatic and he adds focus lines (largely absent from the introduction) to heighten a sense of speed and impact. He also begins to use his trademark "dodododo" sound effects. To add dramatic stakes, Araki features how Izumi's punished for her lack of manners but Rohan struggling to save her. This exposes Rohan's inner kindness and makes the reader empathize with him.

To resolve the conflict, Araki made Rohan use his power to return Ikkyu's manners against him. Araki avoided introducing any exterior element or have Izumi save herself as Araki aims for his character to use their own strengths to tackle challenges.