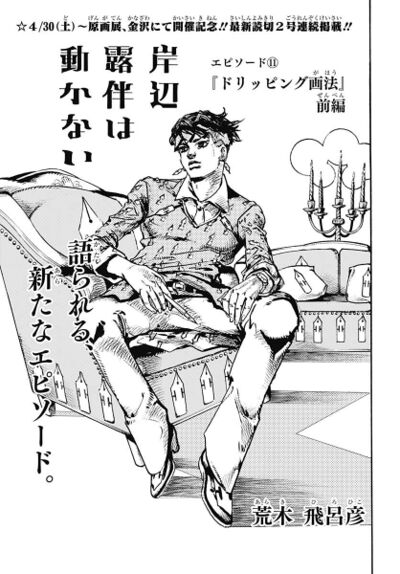 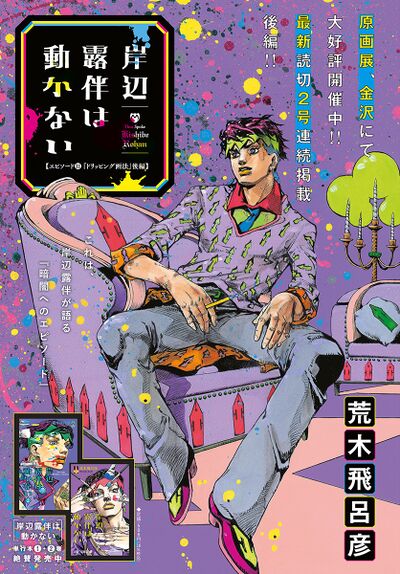 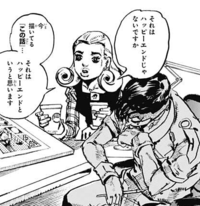 Rohan is working on Pink Dark Boy in his office as Bakin watches. Kyoka arrives and is impressed to see his drip painting style but points out that the way Rohan is doing it isn't improvised or random since he's precisely aiming the drops of ink. She offers Rohan café au lait and then pretends to spill some on his manuscript, before laughing that she's just kidding. However, she notices that Rohan is crying. Confused, Kyoka mentions that she thought the story he's working on has a happy ending. Rohan starts describing "Episode 11". It's the story of an investigation he did at a respectable person's home. Although he usually draws manga with the intention of providing hope to his readers, there isn't a single positive thing in this story. He warns the readers to be prepared for this dreadful episode. 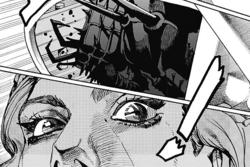 Suddenly, Mitsuki notices a black creature with several spikes on its back just outside her car by the passenger window. She swerves her car and stops to take a look outside but there's nothing there. Her husband keeps trying to talk to her but Mitsuki doesn't respond. He says he'll go pick up Emma himself without the car and then they can talk at the kindergarten. He then hears birds cawing and asks where Mitsuki is. Mitsuki lies again and says those weren't birds but just the noise of her slamming on the brakes. She hangs up, saying she'll be there soon. Wondering what was near her car, she notices a "Watch for Animals!" sign. At first she thinks it might have been a boar but realizes it looked nothing like one. She stops worrying when she notices there's no damage to the car and starts driving quickly to reach the kindergarten.

Later, a car behind Mitsuki starts tailgating her. Mitsuki realizes that it's the same SUV she saw next to her in the parking garage, and wonders if they followed her all the way from the hotel because she dented their door. Wondering what their issue is, Mitsuki notices that their car door doesn't even have a dent nor scratches anymore. Furthermore, she has doubts about the SUV being white now because she thought the one she hit was gray. The mysterious driver speeds up and overtakes Mitsuki. Their passenger window then opens and someone inside takes out a fire extinguisher, pointing it behind them toward Mitsuki's car. Mitsuki's windshield is fully covered by its spray as she screams.

(Mentioned only)
Gods of the Mountain