From JoJo's Bizarre Encyclopedia - JoJo Wiki
(Redirected from The Spirit of Emptiness, Vanilla Ice (8))
Jump to navigation Jump to search

The Miasma of the Void, Vanilla Ice, Part 8 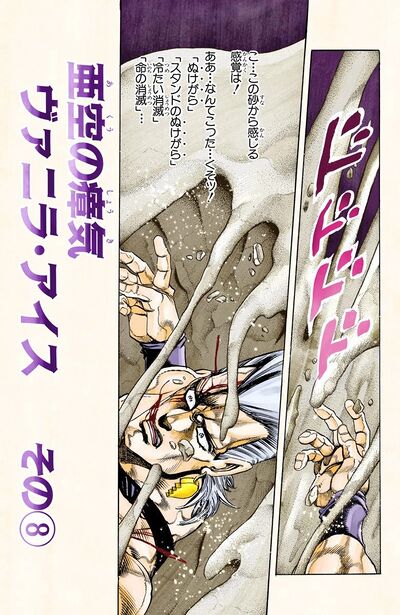 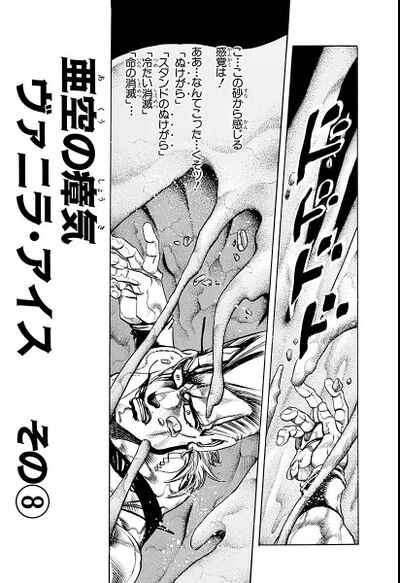 The Miasma of the Void, Vanilla Ice, Part 8 (亜空の瘴気 ヴァニラ・アイス その⑧, Akū no Shōki Vanira Aisu Sono 8), originally DIO's Vampire (DIOの吸血鬼, DIO no Kyūketsuki) in the WSJ release, is the one hundred thirty-second chapter of Stardust Crusaders and the two hundred forty-fifth chapter of the JoJo's Bizarre Adventure manga.

Polnareff mourns for Iggy as he impales Vanilla Ice's forehead. Silver Chariot then grabs the other end of his sword and twists it, breaking Vanilla Ice's neck. Vanilla Ice lays on the floor, motionless. Polnareff crawls over to Iggy, stating that he respected the dog's pride. Suddenly, Vanilla Ice begins to rise. Blinded by rage, Vanilla Ice sends Cream after Polnareff. However, Polnareff was expecting this and attacks Cream with a flurry of stabs. Polnareff understands that DIO had turned Vanilla Ice into a vampire. He uses Silver Chariot to slice a window's drapes, allowing the sun to shine into the room. Vanilla Ice's arm disintegrates within the sun's rays. Polnareff begins mocking Vanilla Ice, goading him into coming closer. Vanilla Ice charges at Polnareff, and completely disintegrates after getting caught under the sun. Triumphant, Polnareff looks outside to the city bathed in sunset. He sees the spirits of Avdol and Iggy ascending. He goes after them, but they disappear. Polnareff cries but quickly gets up. He heads deeper into the mansion, knowing he must avenge his friends by defeating DIO.