From JoJo's Bizarre Encyclopedia - JoJo Wiki
(Redirected from The Spirit of Emptiness, Vanilla Ice (3))
Jump to navigation Jump to search 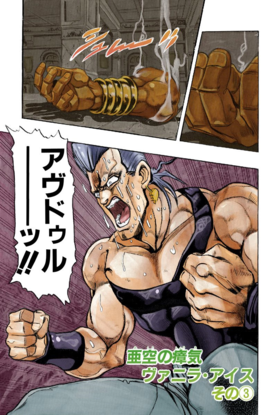 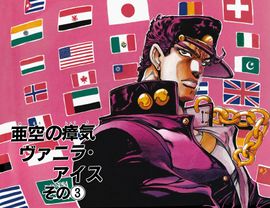 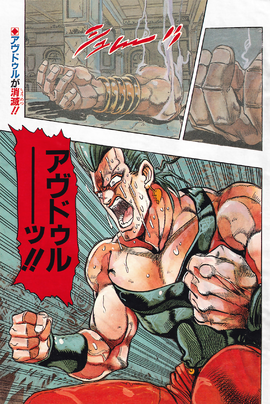 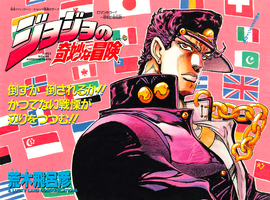 The Miasma of the Void, Vanilla Ice, Part 3 (亜空の瘴気 ヴァニラ・アイス その③, Akū no Shōki Vanira Aisu Sono 3), originally A Shapeless Stand (姿なきスタンド, Subata Naki Sutando) in the WSJ release, is the one hundred twenty-seventh chapter of Stardust Crusaders and the two hundred fortieth chapter of the JoJo's Bizarre Adventure manga.

Polnareff screams in shock as all that remains of Avdol are his severed arms. Cream appears from the void, Polnareff confused as to how it went undetected by both Avdol and Iggy. Polnareff asks where Avdol went. From within Cream Vanilla Ice tells him that he was sent to a "dark dimension" and erased from existence. Vanilla Ice reveals himself, assuring Polnareff and Iggy that they will be next. Polnareff sends out Silver Chariot and attacks Cream with a flurry of stabs. The attack does a great deal of damage to the mansion, but Cream easily avoids it and disappears. Polnareff remembers what Avdol said at the entrance about not saving others, and regrets that he once again caused Avdol to die. As Polnareff mourns, he unintentionally, narrowly evades Cream's attack. Iggy and Polnareff run to another room and block the door, but Cream voids his way through. The two run up a set of stairs, unable to escape from the void of emptiness, Vanilla Ice.