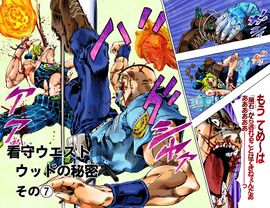 Jolyne shifts her focus into finding the prisoner who had taken DIO's Bone when she notices all the other prisoners in the ward have been defeated, but their bodies are mysteriously bloated. She then sees two people, a short old man with a taller man, and deduces that one of them may be Stand users.