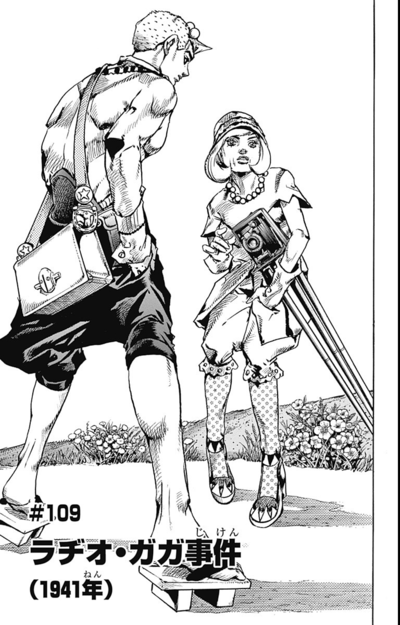 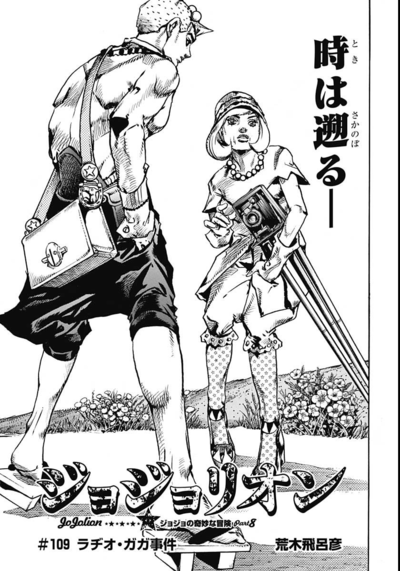 Some time in 1941, a widowed Lucy Steel arrives in S-City to investigate a strange place of interest. At the train station, Lucy takes note of the band-aids on her pick-up driver's fingers, knowing that she would have to carry her luggage by herself. A man offers to carry them for her, but is revealed to be a thief after running away to the opposite direction from their car. Fortunately, a 17-year-old boy named Fumi kicks his sandal at the thief, knocking him down. After Fumi retrieves Lucy's luggage containing her camera equipment and important materials, she offers him 20,000 yen to be her local guide around the city. However, the boy refuses, saying he is supposed to meet his girlfriend. He notices her holding a photograph of an orchard to which he calls the place of "The Radio Gaga Incident", a place of bad luck with numerous deaths in the past. Fumi's girlfriend arrives in the station, although Fumi realizes that the thief had robbed his wallet before running away, forcing Fumi to set the date aside and take Lucy's offer. She introduces herself as Lucy Steel working for the Speedwagon Foundation specializing in botany and geomorphology. He wonders if she was going to the orchard because of a crime that had happened there. As the local legend goes, a woman had followed a strange voice near a guard rail and begun to strip herself. She later disappeared after a farmer's truck passes by, leaving only her clothes and a piece of her bloodied foot behind. Lucy coughs, due to her old age, and only tells Fumi that she had come from America to investigate the site as her "mission", as if it was a command from heaven.

Fumi, Lucy, and the driver later arrive at Morioh's hunting grounds near the orchard owned by the Higashikata Fruit Company. As Lucy inspects the site and observes the Higashikata house with a telescope, Fumi finds the remains of a bird under his foot. He freaks out after Lucy's driver appears behind him, seemingly entranced by a voice only he can hear. He begins to strip down naked and approaches the guard rail, just like the victims in the local legend. Panicking, Fumi calls Lucy's attention before a truck passes on the road and the driver disappears. Fumi inspects the remaining clothes and only finds a severed hand. He tells Lucy to flee as soon as possible but she refuses, explaining that she came to Morioh after discovering that a plant named the "Locacaca" had been growing in the cursed land that was similar to the Devil's Palm in America. Suddenly, Lucy hears strange voices and is sucked into a gap between the guard rails while Fumi can only watch her struggle.