From JoJo's Bizarre Encyclopedia - JoJo Wiki
(Redirected from The Proof of their Love: Born)
Jump to navigation Jump to search
English

The Proof of their Love: Born. 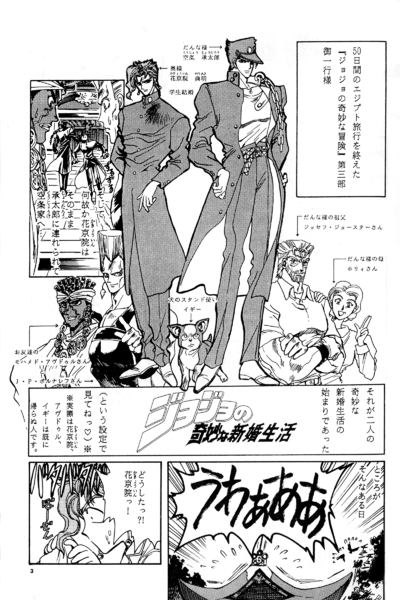 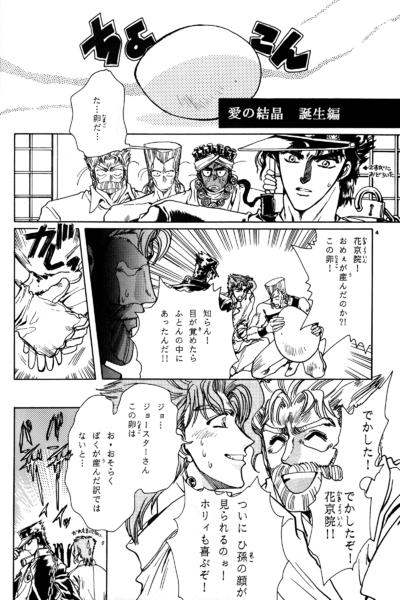 Kakyoin wakes up one morning and discovers a giant egg. He reveals it to his friends. When Polnareff frantically asks Kakyoin if he has laid this egg, Kakyoin says that he doesn't know and that it was just there when he woke up. Joseph happily congratulates Kakyoin, excited to see what his great-grandson will look like and looking forward to Holy's reaction. Kakyoin tries to tell Joseph that this egg might not even be his but he realizes Joseph isn't listening to him.

Everyone begins to hear noises, with Avdol describing them as sounds coming from far away and coming closer. While Polnareff is holding the egg, a child suddenly hatches out of the egg and punches Polnareff's face, knocking him to the ground. The child is shown to bear a star-shaped birthmark on his shoulder. Joseph happily embraces the child and Avdol congratulates Jotaro and Kakyoin. Polnareff points out that even though the child was just born, he already packs a mean punch.

Kakyoin is still confused by this child hatched from an egg but he begins to find it cute as he holds it in his arms. The child then glances at Jotaro, giving him a stern glare. The chapter ends by stating that "the proof of love between Jotaro and Kakyoin has finally appeared". The narration jokes that even though people hatching from eggs is scientifically impossible, the title of the series being JoJo's Bizarre Married Life justifies this strange occurrence and and that now, the new adventures of the 3rd and 5th generation of JoJo can begin.